The CW will shoot a pilot episode for a TV adaptation of Kiera Cass‘ not-yet-published novel, The Selection. This young-adult dystopian title has been compared to The Hunger Games and will be released on April 24th.
So far, five actors have been cast: Aimee Teegarden will play lead heroine America Singer. Ethan Peck will play love interest Prince Maxon. Sean Patrick Thomas will play a royal advisor named Sylvan. Leonor Varela will play Queen Amberly. Martin Donovan will play King Clarkson.
Here’s more from Deadline: “Based on the upcoming series of books by Kiera Cass, The Selection is described as an epic romance set 300 years in the future. Written by Elizabeth Craft & Sarah Fain and directed by Mark Piznarski, it centers on America Singer (Aimee Teegarden), a poor young woman who is chosen by lottery to participate in a competition to marry Prince Maxon(Ethan Peck) and become the next queen of a war-torn nation at a crossroads.” For thirty-five girls, the Selection is the chance of a lifetime. The opportunity to escape the life laid out for them since birth. To be swept up in a world of glittering gowns and priceless jewels. To live in the palace and compete for the heart of the gorgeous Prince Maxon.

But for America Singer, being Selected is a nightmare. It means turning her back on her secret love with Aspen, who is a caste below her. Leaving her home to enter a fierce competition for a crown she doesn’t want. Living in a palace that is constantly threatened by violent rebel attacks.

Then America meets Prince Maxon. Gradually, she starts to question all the plans she’s made for herself- and realizes that the life she’s always dreamed of may not compare to a future she never imagined

Check out the author’s You Tube channel — pretty darn cool! 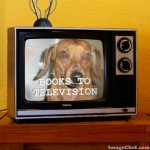 TELEVISION TO BOOKS – I Am A Pole And So Can You! by Stephen Colbert @grandcentralpub