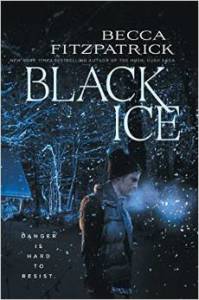 Danger is hard to resist in this sexy thriller from Becca Fitzpatrick, the New York Times bestselling author of the Hush, Hush saga.Britt Pheiffer has trained to backpack the Teton Range, but she isn’t prepared when her ex-boyfriend, who still haunts her every thought, wants to join her. Before Britt can explore her feelings for Calvin, an unexpected blizzard forces her to seek shelter in a remote cabin, accepting the hospitality of its two very handsome occupants—but these men are fugitives, and they take her hostage. Britt is forced to guide the men off the mountain, and knows she must stay alive long enough for Calvin to find her. The task is made even more complicated when Britt finds chilling evidence of a series of murders that have taken place there…and in uncovering this, she may become the killer’s next target. But nothing is as it seems, and everyone is keeping secrets, including Mason, one of her kidnappers. His kindness is confusing Britt. Is he an enemy? Or an ally? Black Ice is New York Times bestselling author Becca Fitzpatrick’s riveting romantic thriller set against the treacherous backdrop of the mountains of Wyoming. Falling in love should never be this dangerous…

After reading the Hush Hush series by Becca Fitzpatrick, and even though those are a bit dark, I was not ready for this super creepy thriller from her. What starts out as a way for Britt and Korbie to have one last hike before the end of the school year, the besties head off to the Tetons.  Britt has some unfinished business with Korbie’s brother, Calvin.  The two had something going and then Calvin went off to college and the relationship fell apart,  Britt still has feelings for him and decides she needs to make him jealous, randomly picks up a guy while getting supplies and now has a fake boyfriend.   As they make their way to the cabin a snowstorm hits and they are forced to hike a bit and stumble onto a cabin with two hot guys.  All except that the hot guys aren’t what they seem to be.   The guys are criminal and not what Britt had in mind as she is forced to bargain with her life to get these two bad elements off the mountain and herself to safety.

Even though the situation is unlikely to happen in real life, the tension and true-to-life teen dialogue makes the whole story viable.  You will be sucked into this one quickly and won’t be able to stop until you reach the thirlling conclusion.  This is definitely not a book you want to read alone at night.  I am not a huge fan of descriptive novels, but this one is so lush and perfectly described that it is easy to imagine being in those mountains.  The bad guys are such a mix of good and evil that makes it even more believable.  All I can say is wow, and that this is one suspensful read.  More, please!

Check out what Becca has to say about her books at a sigining I attended at my local B&N:

Becca Fitzpatrick’s books, Hush, Hush, Crescendo, Silence, and Finale were all New York Times bestsellers. She graduated college with a degree in health, which she promptly abandoned for storytelling. When not writing, she’s most likely running, prowling sale racks for shoes, or watching crime dramas on TV. She lives in Colorado. Visit her at BeccaFitzpatrick.com.