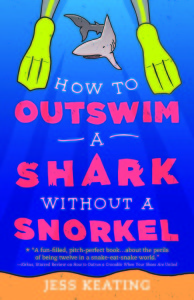 Ana Wright's summer just got terrifying. She's finally getting used to living in a zoo (no, seriously—she lives with her family in an actual zoo), when she's assigned to work in the new shark tank. With her worst enemy. Forget about sharks! Ashley is the ultimate predator. And after Ana's favorite croc peed on Ashley's shoes, she's probably out for revenge.

This can't be good ABOUT THE AUTHOR: As an author and zoologist, Jess Keating has tickled a shark, lost a staring contest against an octopus, and been a victim to the dreaded paper cut. She lives in Ontario, Canada, where she spends most of her time writing books for adventurous and funny kids. Her first fiction novel How to Outrun a Crocodile When Your Shoes Are Untied received a Starred Review from Kirkus and has been nominated for a Red Maple award. Visit her online at jesskeating.com. Follow her on Twitter  and check out her Facebook page.

Ana Wright lives in a zoo with her family and her life pretty much revovles around creatures, great and small.  She was put on the spot and did a presentation on reptiles that went viral during the school year and now that is summer, she wants nothing more to do than hang out with the animals and relax.  Her BFF, Liv, has moved to New Zealand and other than chatting online with her, she feels friendless.  Entering the eighth grade next year was something she planned on doing to together with Liv, not alone.  She is surprised this summer when her grandfather, who owns the zoo, announces a new exhibit, one that involves water!  The new area is taking on new students to help out and when she finds out her worst enemy is going to be her partner there.

Ashley is a known mean girl and seems to have it in for Ana.  She had tried to sabotage Ana’s presentation last year and that left a bad taste in Ana’s mouth.  Liv has announced that she is being moved up a grade and that their plan for the upcoming year is being pushed up, which means that she must find a boy to have her first kiss with.  She has a crush on Kevin but doesn’t know how to deal with it. Ashley has been dumped on her but it seems that everything is going wrong at the new exhibit.  When gates are left unlocked and other overfed, the supervisor blames the girls but then they each blame the other for the disasters.

With the opening day upon them, and Ana in need of a new bathing suit, Ashley decides that Ana has no clue and they go shopping.  The two bond (somewhat) and Ana starts to think Ana isn’t all bad.  This adorable story is full of the pitfalls of growing up and presented in a charming and humorous manner.  They finally work together and at the end become friends and all full of the drama that twelve going on thirteen can entail.  Parents:  this one is very safe for middle graders and with one attempted kiss, nothing to worry about.  It also imparts some important lessons about growing up.