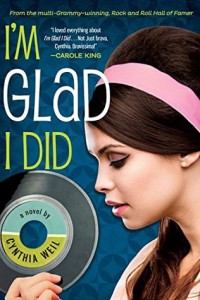 Mad Men meets Nashville in this debut mystery set in 1963, written by Grammy winner and Rock and Roll Hall of Famer Cynthia Weil.

It’s the summer of 1963 and JJ Green is a born songwriter—which is a major problem, considering that her family thinks the music business is a cesspool of lowlifes and hustlers. Defying them, she takes an internship at the Brill Building, the epicenter of a new sound called rock and roll.

JJ is finally living her dream. She even finds herself a writing partner in Luke Silver, a boy with mesmerizing green eyes who seems to connect instantly with her music. Best of all, they’ll be cutting their first demo with legendary singer Dulcie Brown. Though Dulcie is now a custodian in the Brill Building and has fallen on hard times, JJ is convinced that she can shine again.

But Dulcie’s past is a tangle of secrets, and when events take a dark turn, JJ must navigate a web of hidden identities and shattered lives—before it snares her, too.

JJ has graduated early from high school and wants to be a song writer in the famous Brill Building during the early Sixites.  Her parents have other plans for her.  They think she should carry on the family tradition of being lawyers.  Her uncle Bernie, the black sheep of the family, has been excommunicated for his somewhat illegal activities. Secretely, she gets a job as an assistant at Good Music publishing and then tells her parents she will follow their plan if she can’t get a song published.  What should be a simple job turns dark when she meets a once-famous singer, Dulcie Brown, who is recovering from drug issues.  There is also a cute boy she meets in the building, who has his own dark secrets.  Luke (18), whose father just died, had once managed Dulcie and when she dies in apparent suicide, they both think that it was murder.

Lots of twists and turns get them to the end point of uncovering the truth of Dulcie, but JJ knows that she couldn’t have possibly killed herself.  The pair work as a team and there are lots of truths revealed about racisim, drug abuse and the music business.  Well, not so much about music.  I really wished that there was more focus on that part of the story.  JJ and Luke also find out about themselves as the story progresses.   This is a pretty clean romance geated towards teens with only some kissing, as well as,  mentions of drug and alcohol abuse.