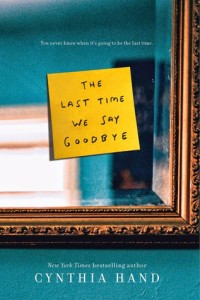 There's death all around us.
We just don't pay attention.
Until we do.

The last time Lex was happy, it was before. When she had a family that was whole. A boyfriend she loved. Friends who didn't look at her like she might break down at any moment.

Now she's just the girl whose brother killed himself. And it feels like that's all she'll ever be.

As Lex starts to put her life back together, she tries to block out what happened the night Tyler died. But there's a secret she hasn't told anyone-a text Tyler sent, that could have changed everything.

Lex's brother is gone. But Lex is about to discover that a ghost doesn't have to be real to keep you from moving on.

From New York Times bestselling author Cynthia Hand, The Last Time We Say Goodbye is a gorgeous and heart-wrenching story of love, loss, and letting go.

Cynthia Hand is the New York Times bestselling author of the Unearthly trilogy. A native of southeast Idaho, she has graduate degrees in creative writing from Boise State University and the University of Nebraska-Lincoln. For the past seven years she has taught writing at Pepperdine University in Southern California. She and her family have recently moved back to Idaho where they are enjoying the fresh air.

Lex’s life has been in freefall since her brother committed suicide.  She thought she had her life all wrapped up and on course, when it seems, out of the blue, her brother, Tyler,  kills himself.  Her mother is quickly unraveling as well, starting to drink to numb the pain.  While her friends try to reach out to Lex, nothing seems to get through.  As she traces back to that fateful day, she tries to figure out what went wrong.   Tyler was the super popular kid, while Lexie was always the nerd.

It seems to trail back to when her father deserted the family and ran off with his secretary.  With no money for extras, Lex, manages to save enough to buy a car, aka Lemon, that gets her back and forth to her therapist appointments which she hates.  Dave, her therapist gives her an assignment:  just write.  This book is snippets of what she writes down mixed with the day-to-day life she now lives.  So many feelings come out as she finally realizes that she was not the cause of his death.

In her senior year, her goal is to go to MIT as a math major, which she excels at.  Her teachers try to reach out and when she fails a math test, everyone becomes alarmed.  Her friends can’t connect with her any longer and only when she becomes angry with her mother, does she actually break through.  At times, this is a bit a ghost story, where she and her mother both sense Tyler hanging around them.  When the two finally reconcile that Tyler is gone and they can’t bring him back, can they move forward.   This is so different from Hand’s other books, but ther writing you fell in love with is still there.  Parents:  best for teens with mentions of alcohol and some strong language.

Review THE HOW & THE WHY by Cynthia Hand @CynthiaHand @HarperTeen