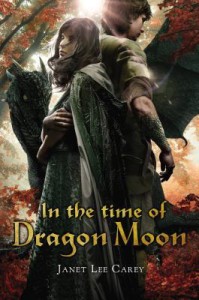 Kathy Dawson Books is pleased to announce a rich medieval fantasy novel from an author whose work has been called “TRULY ORIGINAL . . . FANTASY AT ITS BEST.”

In the Time of Dragon Moon

A perfectly crafted combination of medieval history, mythology, and fantasy, set on Wilde Island, featuring  Uma Quarteney - a half Euit and half English girl, who has never been fully accepted by her Euit tribe - and Jackrun Pendragon - a fiery dragonrider with dragon, fairy, and human blood.

Beware the dark moon time when love and murder intertwine

All Uma wants is to become a healer like her father and be accepted by her tribe. But when the mad queen abducts her and takes her north, Uma’s told she must use her healing skills to cure the aging infertile queen by Dragon Moon, or be burned at the stake. Uma soon learns the queen isn’t the only danger she’s up against. A hidden killer out for royal blood slays the royal heir. The murder is made to look like an accident, but Uma, and the king’s nephew Jackrun, sense the darker truth. Together, they must use their combined powers to outwit a secret plot to overthrow the Pendragon throne. But are they strong enough to overcome a murderer aided by prophecy and cloaked in magic?

“The author’s world-building is detailed and fascinating, and Uma is a strong, admirable heroine. This is a must-purchase for libraries owning the earlier installments and a great choice for where teen fantasy is popular.” –School Library Journal

“Humans, dragons and fey coexist on Wilde Island, but this uneasy peace masks a simmering, mutual distrust that surfaces after the English army abducts an Euit healer and his daughter to cure the aging queen’s infertility—failure is not an option.” – Kirkus Review

~In the Time of Dragon Moon is a story of courage and romance that readers will not soon forget. While Uma’s struggle to help the queen and save her people is intriguing, the depth of her character reaches much further, exploring issues of race, gender, and identity. The politics of Pendragon Castle and Wilde Island offer gripping mystery and adventure, while Uma’s relationship with Jackrun—and even her interactions with her father’s dragon, Vazan—create a rich and insightful protagonist. The text will be a sure favorite of fans of high fantasy. —Meghann Meeusen. VOYA review


Praise for first two books of the Wilde Island trilogy; Dragon’s Keep and Dragonswood
~ALA Best Book for Young Adults
“A remarkable achievement.”  –Lloyd Alexander, author of the Newbery Medal winner The High King
« “Nonstop action may keep readers glued to this page-turner, but strong writing and character development are what will make it linger.” –School Library Journal, starred review
« “Stunning, lyrical prose.” –Booklist, starred review
« “Painful, cathartic and cautiously hopeful; a fairy tale for those who have given up on believing in them, but still yearn for happily ever after.” Kirkus starred review
« “The political intrigue, mythology of Merlin, and romances. . . will have readers racing toward the end and then going back to savor the events more slowly.” – SLJ, starred review Janet Lee Carey grew up in the bay area under towering redwoods that whispered secrets in the wind. When she was a child she dreamed of becoming a mermaid (this never happened).She also dreamed of becoming a published writer (this did happen after many years of rejection). She is now an award-winning author of nine novels for children and teens. Her Wilde Island Chronicles are ALA Best Books for Young Adults. She won the 2005 Mark Twain Award and was finalist for the Washington State Book Award. Janet links each new book with a charitable organization empowering youth to read and reach out. She tours the U.S. and abroad presenting at schools, book festivals and conferences for writers, teachers, and librarians. Janet and her family live near Seattle by a lake where rising morning mist forms into the shape of dragons. She writes daily with her imperious cat, Uke, seated on her lap. Uke is jealous of the keyboard. If Janet truly understood her place in the world, she would reserve her fingers for the sole purpose of scratching behind Uke’s ear, but humans are very hard to train. Author photo credit Heidi Pettit.

Fantasy author, Janet Lee Carey has stopped by to talk all things Dragon.

Thanks for asking me to talk about Dragons. I am something of a dragon nut. The sign on my study door reads: “Warning, Dragon at work. Do not disturb!”I have some small dragon statues and dragon eggs on the shelves in my study. And a glorious giant cloth dragon my sister, Susan Edie made that dances at all the book celebration parties. I should probably tell you the “teacup incident” that happened while writing a dragon-centric interview which began: I fell in love with Tolkien’s Smaug first. I later read Ann McCaffery and enjoyed her mighty winged beasts. But my favorite dragons are the ones I met in Ursula K. LeGuin’s Earthsea books. In the foreword of Tales from Earthsea LeGuin says, “Nobody can explain a dragon.” LeGuin understands their power and their mystery. Dragons embody the wild and dangerous beauty of nature itself. They are myth made manifest. They are . . . Hm, I’d better stop now lest I try to explain them.

Note: Janet had to leave in the middle of this interview to rush off to her critique group. This is what happened next.
. . . so I grabbed my cup of hot tea and my manuscript and raced out the door. My mind was still in a reverie over all things dragon as I drove. At the corner stoplight the car next to me honked and the passenger rolled down the window to point out, “You have a teacup on your roof!” I rescued said teacup before the light turned green. The wind speed had turned the tea cold. Still I drank it. Thoughts of dragons can be so distracting. The first page of my new website says: “Walk right through the story door. I write about the moments that transform us, the magic all around us, and the dragons who long ago gave us fire.” Yes in my Wilde Island world, the dragons saved the human race in the ice age by giving them fire. And if you don’t know that, “Then you don’t know your hisssstory,” as the dragon, Lord Faul, would say.

And now I think I should leave you with a few lines about dragons from the pages of In the Time of Dragon Moon.

~A swirling gust, swift and hot, stirred us both. Lord Kahlil wheeled overhead, coming closer with each spiral, his great wings outstretched like sails, the night clouds deep red above him. Jackrun’s black cloak and my gray one slapped against each other like battle flags.
And finally a scene with the red dragon, Vazan.

~I was about to light the cleansing fire when a shadow overcame the hill. Vazan stormed in, her hot gust blowing me off my feet. I flung my hands back to catch my fall and landed with a thump as she settled noisily on the summer grass.

One eye on the grave, the other on me, she lowered her great head. I brushed myself off and stood again, facing her. Her nostrils flared as she sniffed the earthen mound. She gave a smoky huff when she caught my father’s scent.

Vazan dug a talon into the soft soil of my father’s grave. She was all wind and fire, not bound to earth as humans are, though she loved her rich hunting grounds around our volcano. Her bond to my father showed in the great sacrifice she’d made leaving her cave in Devil’s Boot to follow us north. Smoke billowed from her nose. Her breaths were long sighs. Dragons do not cry.

I breathed in her smoke, gray grief between us. At last she spoke.

“There is no one to heal this barren queen now. She will leave the king’s soldiers in Devil’s Boot. We’ll lose all our freedom to these English vermin!”

“I have the herbs to cure infertility, and I have the Adan’s book.” The keys to Father’s trunk and his Herbal clinked as I pulled the necklace out to show her.

Vazan flattened her ears against her head. “What good are the herbs and this book? Men have the power to heal. Women do not have that power.”

“You are female, Vazan. You are powerful.”

I crossed my arms. My chest ached. Bound in cloth, wrapped in sorrow, I had no heart to argue here at Father’s grave, but battle is dragon’s bread. “We both want the same thing. I have to treat the queen so she’ll keep her promise. What other choices do we have?”