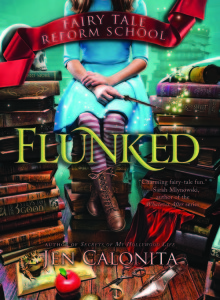 Would you send a villain to do a hero's job?

Flunked is an exciting new twisted fairy tale from the award-winning author of the Secrets of My Hollywood Life series. "Charming fairy-tale fun." -Sarah Mlynowski, author of the New York Timesbestselling Whatever After series.

Gilly wouldn't call herself wicked, exactly...but when you have five little brothers and sisters and live in a run-down boot, you have to get creative to make ends meet. Gilly's a pretty good thief (if she does say so herself).

Until she gets caught.

Gilly's sentenced to three months at Fairy Tale Reform School where all of the teachers are former (super-scary) villains like the Big Bad Wolf, the Evil Queen, and Cinderella's Wicked Stepmother. Harsh. But when she meets fellow students Jax and Kayla, she learns there's more to this school than its heroic mission. There's a battle brewing and Gilly has to wonder: can a villain really change?

"Fairy Tale Reform School is spellbinding and wickedly clever. Gilly is smart, spunky, and a hilarious narrator, and I cannot wait to read about her next adventure!" -Leslie Margolis, author of the Annabelle Unleashed novels and the Maggie Brooklyn mysteries

"Fairy Tale Reform School is a fresh and funny take on the enchanted world. (And who hasn't always wanted to know what happened to Cinderella's stepmother?)" -Julia DeVillers, author of the Trading Faces identical twin series and Emma Emmets, Playground Matchmaker Picture of my Chihuahua, Captain Jack Sparrow. He’s very feisty, needy, and my writing companion! Obviously he’s a huge Mickey Mouse fan, just like the rest of the family!

It’s no secret how Jen Calonita knows the inside scoop on Hollywood. A former entertainment editor at a teen magazine, Jen started out her career chronicling backstage life at concerts with Justin Timberlake and interviewing Zac Efron on film sets. It was her work in the entertainment world that inspired her first series,Secrets of My Hollywood Life. The six-book series is about a teen starlet named Kaitlin Burke who grows weary of the fame game, but loves being an actress and it’s been published in nine countries.

Jen usually likes to write about worlds she knows so she moved on to camp life in the books Sleepaway Girls and Summer State of Mind (since she was a camp counselor as a teen), then tackled reality TV (which she also covered in magazines) in Reality Check. It wasn’t until she wrote Belles, which is about two polar opposite girls who share one life-altering secret, that she entered a world different from her own.

It was so much fun creating a new world that Jen jumped into a fairy tale one for her first middle grade, Flunked, which is the first book in the Fairy Tale Reform School series. Fans will love getting to know spunky Gilly and the enchanted reform school she attends run by Cinderella’s formerly wicked stepmother, when the first book comes out March 2015. It will be followed by another middle grade series called VIP in early 2016. The first book, I’m with the Band, is a diary-eye look at life on the road with the world’s biggest boy band as told by their number one fan, Mackenzie Lowell. (Go back and reread the first paragraph of this bio to see how Jen came up with that idea!)

PLEASE WELCOME JEN TO BOOKHOUNDS YA

Way too many books on my “to read” list! The stack keeps getting larger and larger and one of these days it’s going to fall down. I also have several bottles of hand cream because I can never decide on a favorite and a journal from my fourth grader. We write each other notes back and forth, which has been great.

Meg Cabot! She’s my favorite author and the whole reason I wanted to write YA when I started ten years ago. I got to interview her once for a magazine and was gushing about the Princess Diaries books. I can’t wait to read Royal Wedding. I got a copy of it at ALA Midwinter and waited on line to see Meg. When she recognized me, I almost passed out. I’m a huge fan of her writing.

Nails on a chalkboard. That squeaky sound? Kills me. Also sloppy eating when you can hear someone chewing? It makes me twitch.

I am too vanilla for that to happen! The most you’ll find on there are pictures of me in a tutu. I’m wearing one (in two weeks) for my first half marathon, which is the Disney Princess Half. I’ve got a costume and everything. They’ll be plenty of pictures of that!

I’ve tried it both ways and I’m not sure what’s better, to be honest. I like the post it note approach where I keep a visual list of scenes I want in the book, and I definitely outline, but sometimes your characters take on a life of their own and you have to follow their lead.

Giveaway  Ends 3.14.15 and open to all who can legally enter.
Limited to US – Canada only,  sorry no PO Boxes
You must check back to see if you have won.
An email will be sent and you have 48 hours to reply or a new winner will be chosen.
Winner will be announced within 48 hours at the end of the giveaway. Giveaway is organized by Bookhounds and sponsored by the publisher.
It has no affiliation with Facebook, Twitter or any other entitiy.
Void where prohibited.