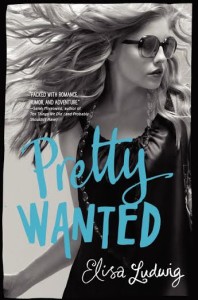 Willa’s string of good-hearted but ill-conceived thefts at her former high school catapulted her into a life she hardly knows. She became a cult hero, but soon afterward, her mom disappeared, leaving only a cryptic message. When Willa hit the California highway to find her, she discovered a dark family secret: Joanne Fox is not who she says she is-and neither is Willa. Now, Willa and fellow trouble-maker Aidan must race to St. Louis, Missouri, Willa’s birthplace. There, they hope to find answers about Willa’s past. But uncovering the truth requires solving a decades-old murder case.

Unfortunately, the perps are still out there . . . and willing to do whatever it takes to keep the case cold. With Willa’s face on the nightly news and the police hot on her trail, it might not matter that Aidan and her friend Tre are there to help. Willa’s only hope is to find the truth before it finds her first. Praise for the PRETTY CROOKED series:“Fans of mystery and suspense will enjoy the fast-paced style of the Pretty Crooked series. Readers who enjoyed Ally Carter’s Heist Society and love romantic tension will relish this second entry and look forward to the conclusion in the last book.” —Voice of Youth Advocates (VOYA)

“Packed with romance, humor, and adventure, Pretty Crooked will steal your heart.” —Sarah Mlynowski, author of Ten Things We Did (But Probably Shouldn’t Have)

“A satisfying close to this trilogy that began with a clever high school prank and morphed into a full-scale action adventure.” —Kirkus Reviews My debut young adult novel PRETTY CROOKED (Katherine Tegen/HarperCollins) was released in March 2012, and the sequel, PRETTY SLY, is out in March 2014. COIN HEIST, a YA thriller, is out in June 2014 (Adaptive Studios). I live in Philadelphia with my husband and son.

PLEASE WELCOME ELISA TO BOOKHOUNDS YA

Right now I am rereading PAPER TOWNS by John Green for a teen reading club I’m helping facilitate at a local library. The stack of TBRs next to that includes BROWN GIRL DREAMING, 100 SIDEWAYS MILES and GIRLS LIKE US.

I’m not great at active fan-girling—it’s more like admiring shyness. But if I ever met M.T. Anderson or E. Lockhart I would probably have some heart palpitations.

People mispronouncing my name—it’s spelled wrong, so this is a lifelong issue. I try to be flexible about it and answer to all the variations but sometimes I wish I had that extra S to clarify things.

Yes! Some of my Google search history looks uncomfortably close to Willa’s. Then again, anyone looking would also see a bunch of slow cooker recipes, Houzz photos and (I admit it!) celebrity gossip in the mix.

For this series I absolutely had to plot it out pretty obsessively, just to keep all the books straight and a clear through-line. Plotting gives me a sense of confidence and takes so much angst out of the equation. There were moments, though, when the original plot points didn’t work as the story evolved, so I had to be flexible. In general, I do like to leave some room for improvisation as you never do know where your characters are going to take you.

Thank you so much for having me on your blog! Details: Win (1) of (3) signed copies of Pretty Wanted by Elisa Ludwig (US Only)