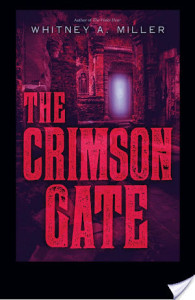 Harlow Wintergreen has just been named the new Matriarch of VisionCrest, the powerful religious organization previously led by her father. But there's one big problem. The real Harlow is trapped inside a Cambodian temple, and her double, the evil Isiris, has escaped confinement and is masquerading as her.

Now initiated as their leader, Isiris intends to unleash a killer super virus aimed at cleansing the planet of VisionCrest. In order to stop her, Harlow must find a way out of the temple and locate the Resistance...or the world will be destroyed.

AMAZON | BARNES & NOBLE | BOOK DEPOSITORY
My Thoughs
Harlow thinks she has escaped Isiris, the goddess that the cult her father started worships, but finds that she is actually trapped at the Temple where she was to be made Matriach.  In a sense, she has now split into two with Isiris taking her form and manipulating Adam and others into thinking it is really her.  Her other half has escaped and it back at the compound in Vietnam where she  runs into a girl named Parker.  Parker has been left behind and doesn’t trust Harlow but knowing that neither has a choice, they band together to find Hayes and put an end to Isiris.
The story is told from both points of view between Isiris as Harlow and Harlow herself.  As Harlow and Parker take flight through Russia and China, trying to avoid the Watchers still loyal to Isiris.  T his starts a cat and mouse game with Harlow trying to protect the world from a virus that Isiris plans on destroying the world.  Parker turns out to be stronger than Harlow ever imagined.  All I can say, is that this is an exciting second book which needs a conclusion.  Parents:  there is some graphic violence.
ABOUT THE AUTHOR

Whitney A. Miller lives in San Francisco with her husband and a struggling houseplant.
She’s summited Mt. Kilimanjaro, ridden the Trans-Siberian rails, bicycled through Vietnam, done the splits on the Great Wall of China, and evaded the boat police in Venice. However, her best international adventures take place on the page.Whitney is represented by Jennifer Laughran at the Andrea Brown Literary Agency.
WEBSITE: http://whitneyamiller.com/
TWITTER:
@whitneymiller
GOODREADS:
https://www.goodreads.com/author/show/7142407.Whitney_A_Miller
FACEBOOK: https://www.facebook.com/whitneymillerwrites Giveaway is open to International. | Must be 13+ to Enter

2 Signed Copies of The Crimson Gate and Swag by Whitney A. Miller