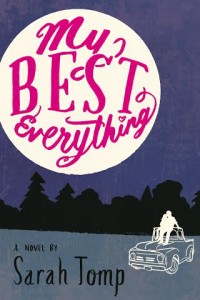 You say it was all meant to be. You and me. The way we met. Our secrets in the woods. Even the way it all exploded. It was simply a matter of fate.

Maybe if you were here to tell me again, to explain it one more time, then maybe I wouldn’t feel so uncertain. But I’m going back to the beginning on my own. To see what happened and why.

Luisa “Lulu” Mendez has just finished her final year of high school in a small Virginia town, determined to move on and leave her job at the local junkyard behind. So when her father loses her college tuition money, Lulu needs a new ticket out.

Desperate for funds, she cooks up the (definitely illegal) plan to make and sell moonshine with her friends, Roni and Bucky. Quickly realizing they’re out of their depth, Lulu turns to Mason: a local boy who’s always seemed like a dead end. As Mason guides Lulu through the secret world of moonshine, it looks like her plan might actually work. But can she leave town before she loses everything – including her heart?

The summer walks the line between toxic and intoxicating. My Best Everything is Lulu’s letter to Mason – though is it an apology, a good-bye, or a love letter? About Sarah:
Sarah Tomp has a MFA in writing for children and young adults from Vermont College of Fine Arts.
My Best Everything, a novel for young adults, will be published March 2015 byLittle, Brown Books.
She is also the author of a picture book; Red, White, and Blue Good-bye   (Walker Books for Young Readers).
Sarah teaches creative writing for University of California San Diego Extension. She reviews books for Bookbrowse.com and co-authors the blog, Writing on the Sidewalk.
Photo by Roxyanne Young
Website | Twitter | Goodreads


PLEASE WELCOME SARAH TO BOOKHOUNDS ya

I was hunting around Sarah’s blog and found a fascinating post about a fossil she dragged across country and I had to know more about this rock!

First of all, thank you so much for having me on your blog today! You combine two of my favorite things: Books and Hounds! Who needs anything else?

Here is my hound, Luna. She is my loyal muse and assistant. Many writerly problems have been solved during our daily walks—and naps. Her bed is right beside the spot where I work. She reminds me when it’s time to get up and move. And now you’re asking about the relationship between fossils and writing—you have a fascinating brain!

In the back yard of my suburban southern California neighborhood, there’s a fossil under my lemon tree. It’s clearly a fern, about a foot in length within a larger rock. I think it’s quite stunning. I must, considering I made a friend help me haul it out of the woods. And then, a year later, I loaded it into my car when I moved across the United States. I’ve moved four times since then, from one seedy apartment to another, until finally landing here; and each time, the rock came too. I found this fossil—my fossil—in the woods of Virginia. I couldn’t tell you exactly where, only that I discovered it during a weekend of camping when I was in college. As the daughter of a geologist, I was trained to recognize such things. I loved it, I took it.

I was young and a little bit wild. Definitely impulsive and with a vague disregard for rules. Even though I never made moonshine the way Lulu and her friends do in My Best Everything, my adventures in the woods of Virginia were definitely a kind of research, twenty years earlier. That’s part of what I wanted to capture in my story—that feeling of being young and reckless, and believing I could claim something simply because I loved it.

My father loved rocks. Like seriously loved them. Once, on a family trip, the person working the airport check-in desk picked up my father’s suitcase, and immediately asked, “What do you have in here? Rocks?” He meant it as a joke. But yes, as a matter of fact there were rocks in there. And that was a vacation trip.

He also loved stories. Reading them, talking about them, and making them up. His specialty was ghost stories. He could take the most ordinary situations and weave in a creepy story to make us hold tight to each other.

For my father, rocks were storytellers too. He could scan a horizon and know what events had worked together to form the mountain range in the distance. He understood how random boulders appeared alone in a field. I think perhaps he even saw rocks as individuals, each one formed by a particular set of conditions and experiences.

Fossils are an interesting blend of organic life and inanimate rock. They’re an impression or casing of a living organism’s remains.

My story is also a blend of organic and inanimate matter.

While writing this story, my characters were very much alive in my mind. They grew and changed—even if I was the agent of their evolution. But once it was finished and sent to print, my characters, Lulu and Mason, Roni and Bucky, Sal and all the junkyard Muscles became frozen in time. The book is the inanimate representation of this world that existed in my head. It’s a kind of fossil now, waiting to be discovered.

A fossil is proof that once upon a time, that organism was alive and part of this world. But not everything becomes a fossil. A precise and exact set of circumstances has to come into play in order for one to form. Usually, when plants and animals die, they simply rot away and become part of the soil. A fossil is not its own thing. It represents a community and ecosystem. It speaks for other lives, now gone.

Writing is like that too. My Best Everything, represents a multitude of other thoughts, ideas, pages, stories, books—my own words, written and tossed; but also other writers’ stories I’ve read, each one becoming part of my writerly DNA.

My father’s stories are in there too. He’s the reason I love the outdoors. And his passionate love for science and his intense ambition and focus made it easy to imagine a girl like Lulu even though I am far more of a dreamer and dawdler. He also taught me to notice an author’s name, to be aware that there’s a real live person behind those words. And, maybe most importantly, he was a true romantic. Like me.

He’s the reason I had to take that fossil, whether I had the right to or not. Even though he couldn’t see it—he’d died unexpectedly a year before I found it—I knew he would understand. He’d expect it.

And now I send my fossil, my story, out into the world. I hope you love it. Claim it. Make it yours.
Giveaway Details:

10 Finished Copies of MY BEST EVERYTHING US Only