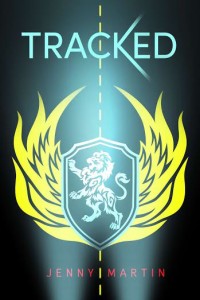 The Fast and the Furious gets a futuristic twist in this action-packed debut!

On corporately controlled Castra, rally racing is a high-stakes game that seventeen-year-old Phoebe Van Zant knows all too well. Phee’s legendary racer father disappeared mysteriously, but that hasn't stopped her from speeding headlong into trouble. When she and her best friend, Bear, attract the attention of Charles Benroyal, they are blackmailed into racing for Benroyal Corp, a company that represents everything Phee detests. Worse, Phee risks losing Bear as she falls for Cash, her charming new teammate. But when she discovers that Benroyal is controlling more than a corporation, Phee realizes she has a much bigger role in Castra’s future than she could ever have imagined. It's up to Phee to take Benroyal down. But even with the help of her team, can a street-rat destroy an empire? Jenny Martin is an author and librarian. Her first novel, Tracked, will be released on May 5th, 2015 by Dial, an imprint of Penguin Random-House. Jenny is also an experienced speaker, panelist and presenter who’s appeared at many state and regional conferences, events and festivals. She lives in Dallas, with her husband and son, where she hoards books and writes fiction. And yes, she’s still on a quest for the perfect pancake.
Website  | Blog | Twitter  | Facebook | Pinterest | Tumblr | Instagram | Goodreads

How did a mild mannered librarian become a sci fi road warrior?

Four years ago, I began writing a novel. It’s about a young driver, who amidst intense interplanetary conflict, rises from the gutter to become a pro-circuit legend. And as Phee Van Zant jumps into the big show, she’s faced with a choice—embrace life as a rally champion, or transform from street rebel to true revolutionary.

In less than a week, Phee’s story—Tracked—will finally be out in the wild. And after all this time, the first bits of feedback and reader observations are beginning to reach me, not through intergalactic transmissions, but in all the usual ways, as I sit at my desk in the ordinary world. So far, by far, this has been the best part of the writing journey—seeing my heroine’s story in readers’ hands.

To be honest, it’s an exciting, strange and surreal thing to see my main character analyzed and embraced, especially in such positive ways. Phee won’t be universally loved, and I would never, ever expect her to be. (That’s the beauty of reading, after all—we all have our own unique, varied experiences with books, and as a librarian…that’s a sacred thing to me, something to cherish and protect.) Nevertheless, there have been some kind words about Phee. Words I’m not used to hearing.

I’m not used to these words, because…Phee is everything I’m not. She’s bold and reckless; foot to the floor, all the way. This girl eats fear for breakfast, while I’m just about as timid as they come. I’d never have the guts to get behind the wheel or smash my way into the winners’ circle. So where on earth did my heroine come from? How did a mild-mannered librarian like me write a story about a spitfire road warrior like Phee?

I’ve written quite a bit about this before, but the answer’s buried in the heart. In the heart of a little girl who grew up devouring adventures novels and watching swashbuckling epics on the big screen. A girl who desperately wanted to be the rogue and the hero, just like Han and Luke, but whose spark was slowly dying inside, because she didn’t think she was allowed.

But then…Tracked came along. The idea for the book came quickly, and right away, my main character jumped into the driver’s seat of the story. She invaded my imagination, and as she began her journey, she taught me how to begin mine. As she came alive on the page, I did, too. I pushed past my self-doubt and hesitation. I grew in confidence. I wasn’t so worried anymore. I thought to myself…now I can be whoever I want to be. No apologies.

And maybe, that’s the real lesson, the one I was supposed to learn. Like Phee, we all have the power to choose our own path. To love each other. To love ourselves fiercely, and build a stronghold deep within; a place we fight for, a place we share with others, but also a place no enemy can reach without our consent.

In the end, I think this fortress—this inner life—belongs to every heroine. Even to Phee, my foolish girl, who drives too fast and mouths off too much and looks before she leaps. Because it is the dominion of all courageous girls—the ones who live in books, and perhaps even the ones who write and read them. In some ways, maybe it belongs to the latter, most of all.

5 winners will receive a finished copy of TRACKED and an awesome swag pack! US Only.

5 winners will receive a finished copy of TRACKED! US Only.