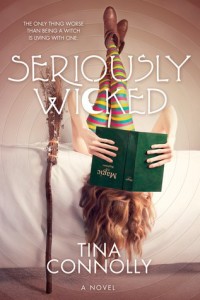 The only thing worse than being a witch is living with one.
Camellia’s adopted mother wants Cam to grow up to be just like her. Problem is, Mom’s a seriously wicked witch.
Cam’s used to stopping the witch’s crazy schemes for world domination. But when the witch summons a demon, he gets loose—and into Devon, the cute new boy at school.
Now Cam’s suddenly got bigger problems than passing Algebra. Her friends are getting zombiefied. Their dragon is tired of hiding in the RV garage. For being a shy boy-band boy, Devon is sure kissing a bunch of girls. And a phoenix hidden in the school is going to explode on the night of the Halloween Dance.
To stop the demon before he destroys Devon’s soul, Cam might have to try a spell of her own. But if she’s willing to work spells like the witch...will that mean she’s wicked too? Tina Connolly is the author of the Ironskin trilogy from Tor Books, and the Seriously Wicked series, from Tor Teen. Ironskin, her first fantasy novel, was a Nebula finalist. Her stories have appeared in Women Destroy SF, Lightspeed, Tor.com, Strange Horizons, Beneath Ceaseless Skies, and many more. Her narrations have appeared in audiobooks and podcasts including Podcastle, Beneath Ceaseless Skies, John Joseph Adams’ The End is Nigh series, and more. She runs the Parsec-winning flash fiction podcast Toasted Cake.

She is originally from Lawrence, Kansas, but she now lives with her family in Portland, Oregon, where it is nice and green and wet. Photo credit Caroline M. Yoachim.
Website  | Twitter | Tumblr | Pinterest | LibraryThing |GoodReads |Facebook

PLEASE WELCOME TINA TO BOOKHOUNDS YA

Oh man, I have such a massive TBR pile. I’m working on the sequel to Seriously Wicked right now, and I have a hard time reading novels while I’m in the middle of a first draft. So I’m going through my piles of anthologies, including my contributor’s copies from last year I never got to. I just finished Unidentified Funny Objects 3 (ed. Alex Shvartsman) and it was great fun.

And NOW, I’m finally reading my copy of Women Destroy SF! (ed. Christie Yant.) OMG, this book is fantastic. I’m only partway through (it’s huge!), and so far, every story is amazing. This is one of the most solid anthologies I’ve read in a long time (and makes me even happier that I managed to sneak in with a super-short flash piece.) One of my favorites so far is Maria Dahvana Headley’s really funny and weird foodie piece “Dim Sun,” but honestly, every single one of the stories has been fantastic so far.

If I think I’ve accidentally hurt someone’s feelings. I’ll replay that all day and all night (long after the person has forgotten it, I’m sure!)

I started out in short stories, so I used to have a hilariously awful process whereby I jumped around to different parts all over the story, trying to figure out what sort of a story it was and how it went together and who was in it. I quickly realized this was a terrible way to write a novel. Nowadays I’d say I’m sort of in the middle – I start with a one-page outline and then go with the flow. Sometimes things change a bit!

Oh gosh I love pie. (Hang on, this could get long.) Let’s see, my favorite pies are fruit and nut pies. I will eat any of them: apple, pear, cherry, blueberry, mincemeat, key lime, banana cream, pecan…. I particularly love plum pie, so in the late summer when I can get a lot of fresh plums I often make a quick plum crisp in the toaster oven. I have a really small pan I picked up somewhere, and I chop up a couple plums and throw them in it. Then I mix some flour, some sugar, and some butter, and sprinkle it on top. Put it in the toaster oven during dinner, and at the end you have plum crisp. SO GOOD. Now I want pie, too. Darnit.

I used to do a lot of theatre, so even when I put it down to focus on writing I still missed it. Rachel Swirsky used to be the editor of Podcastle – this was around 2008 or so – and she knew I was a fellow theatre person, so she asked me if I’d like to read a story for them. At this point, gosh, I must be approaching about 50 full-length stories I’ve recorded for the various SF podcasts. (Plus the entire audiobook for Alex Shvartsman’s first collection, Explaining Chthulu to Grandma!) And then in 2012 I was wanting to do some more narrating, and expand my range, and I decided to start my own flash fiction podcast (Toasted Cake – toastedcake.com) which has been SUPER fun. I’ve loved picking a variety of stories to read. And now, it’s getting close to 150 episodes!

5 winners will receive a finished copy of SERIOUSLY WICKED! US Only.