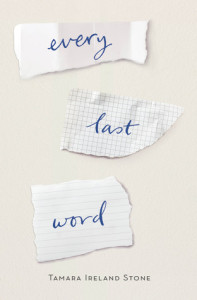 If you could read my mind, you wouldn't be smiling.

Samantha McAllister looks just like the rest of the popular girls in her junior class. But hidden beneath the straightened hair and expertly applied makeup is a secret that her friends would never understand: Sam has Purely-Obsessional OCD and is consumed by a stream of dark thoughts and worries that she can't turn off.

Second-guessing every move, thought, and word makes daily life a struggle, and it doesn't help that her lifelong friends will turn toxic at the first sign of a wrong outfit, wrong lunch, or wrong crush. Yet Sam knows she'd be truly crazy to leave the protection of the most popular girls in school. So when Sam meets Caroline, she has to keep her new friend with a refreshing sense of humor and no style a secret, right up there with Sam's weekly visits to her psychiatrist.

Caroline introduces Sam to Poet's Corner, a hidden room and a tight-knit group of misfits who have been ignored by the school at large. Sam is drawn to them immediately, especially a guitar-playing guy with a talent for verse, and starts to discover a whole new side of herself. Slowly, she begins to feel more "normal" than she ever has as part of the popular crowd . . . until she finds a new reason to question her sanity and all she holds dear.

I am so excited about the upcoming book from Tamara Ireland Stone!  It sounds like a wonderful read.  It doesn’t come out until June 16th, but you can win a copy now! Tamara Ireland Stone (www.TamaraIrelandStone.com) is the author of Time After Time and Time Between Us, which Melissa Marr praised as a “beautifully written, unique love story,” and has been published in over twenty countries. A former Silicon Valley marketing executive, Tamara  enjoys skiing, hiking, and spending time with her husband and two children. She lives just outside of San Francisco. Giveaway Ends 5.31.15 and open to all who can legally enter.
US only – must be over 18 or have your parents permission to enter.
An email will be sent and you have 48 hours to reply or a new winner will be chosen.
Winner will be announced within 48 hours at the end of the giveaway. Giveaway is organized by Bookhounds and sponsored by publisher
It has no affiliation with Facebook, Twitter or any other entitiy.
Void where prohibited.
Courtesy of Disney Hyperion
Not responsible for lost, stolen or damaged prize.