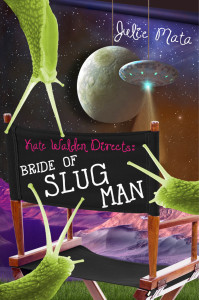 After her huge success with her first feature-length movie, seventh-grader Kate Walden is eager to start on her next film, a sci-fi romance called Bride of Slug Man. When a new kid comes to town from New York City, Kate thinks she might have a new found film buddy-someone to share her interest with. And it doesn't hurt that he's pretty cute. But it turns out that Tristan is making his own movie, and now the classmates Kate thought were eager to join her cast and crew are divided.

With rumors spreading in school and between sets, Kate finds herself juggling more than just call times and rewrites. And judging from the whispers Kate hears about Tristan Kingsley,she suspects that he isn't interested in having a fellow film-buff friend; he just wants to prove himself as the best filmmaker in school by winning the Big Picture Film Festival. Kate vows to enter too, and tries to focus on just making the best movie she can.

But between the cutthroat popularity contest, a bully situation that goes from bad to worse, and several on-set mishaps, Kate is going to need all the movie magic she can get to make sure Bride of Slug Man hits the big-screen. Night of the Zombie Chickens is supposed to be Kate Walden’s breakout film. But her supporting actresses-her mother’s prize organic hens-are high maintenance, to say the least. Thank goodness Kate’s best friend Alyssa is the star. She’s great at screaming and even better at killing zombies in creative ways.

But when Alyssa turns into a real-life soulless zombie and ditches Kate for the most popular girl in seventh grade, Kate suddenly finds herself both friendless and starless. Now, thanks to Alyssa’s new crowd, Kate is the butt of every joke at school and consigned to the loser table at lunch.

If movies have taught Kate anything, it’s that the good guy can always win-with the right script. And her fellow social outcasts may be the key to her own happy ending. Kate hatches the perfect revenge plot against her former best friend, but even though her screenplay is foolproof, Kate soon realizes that nothing-in filmmaking or in life-ever goes exactly as planned. Especially when there are diabolical hens out to get you. About the Author
Julie Mata grew up outside Chicago and currently lives in Wisconsin, where she owns a video production business with her husband.. She loves movies and once wrote and directed her own short film. She also loves traveling, gardening, and reading a really good book. Her first book was Kate Walden Directs: Night of the Zombie Chickens. For more information, including a downloadable curriculum guide and a filmmaking tip of the month, visit her website: juliemata.com.
Twitter: @juliehmata

PLEASE WELCOME JULIE TO BOOKHOUNDS YA

I have an eclectic stack of fiction right now, which includes The Twistrose Key by Tone Almhjell, The Hearts of Horses by Molly Gloss, Pure by Andrew Miller, The Apothecary by Maile Meloy, and The Prisoner of Heaven by Carlos Ruiz Zafón.

I absolutely love the books of Mary Lawson. Her writing is spare yet lovely and her characters ring true. I read Crow Lake a second time and it felt indulgent, like I was eating a bar of dark chocolate. Is there such a thing as a language luxury?

I cringe at stereotypes—in children’s fiction it’s the bad girl/boy, who only seems to exist to make life miserable for the main character. I’m hoping we’ve seen enough mean cheerleaders for a while. And enough with the stupid/hypocritical/evil Christian characters—that’s just boring and unoriginal. While I love strong female characters—hopefully I wrote about one—I cringe a bit at the tougher than any boy female. Emulating men isn’t my idea of a strong female . . . and doesn’t show much originality. Women are strong and AND feminine. That’s what makes us so inspiring and . . . well, female.

It’s more likely to get me an appointment for psychiatric evaluation. My Google searches for Kate Walden Directs: Bride of Slug Man included director Peter Jackson (does he have a beard?), ranidaphobia (fear of frogs), forced perspective (a film technique used by Steven Spielberg and Kate Walden), spy toys for kids, recipes for slime, organic poultry conventions, Ed Wood, and UFO’s. And yes, all these things do show up in the book!

I always start with an outline because I don’t like the thought of toiling endless hours only to find that my plot heads straight off a cliff with no plausible ending in sight. That’s the stuff of nightmares. That said, a LOT of my ideas come on the fly as I’m writing. Some of my favorite scenes (see ranidaphobia above) came out of nowhere. I think of it as a musician riffing on their instrument. My mind plays a riff, and that sparks another riff, and pretty soon I’m writing about squashed frogs. It’s weird and fun. Giveaway!
One lucky winner will receive both books featuring Kate Walden – KATE WALDEN DIRECTS: NIGHT OF THE ZOMBIE CHICKENS and KATE WALDEN DIRECTS: BRIDE OF SLUG MAN. (U.S. addresses; allow 4-6 weeks for delivery.)
Giveaway Ends 6.3.15 and open to all who can legally enter.
US only – must be over 18 or have your parents permission to enter.
An email will be sent and you have 48 hours to reply or a new winner will be chosen.
Winner will be announced within 48 hours at the end of the giveaway. Giveaway is organized by Bookhounds and sponsored by publisher
It has no affiliation with Facebook, Twitter or any other entitiy.
Void where prohibited.
Not responsible for lost, stolen or damaged prize.