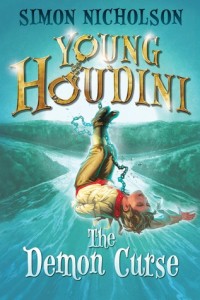 Young Harry Houdini is a master magician, an impressive performance artist who dazzles crowds with his daring feats. But when Harry and his friends Billie and Arthur are called to New Orleans by the mysterious Order of the White Crow, the trio is faced with magic of an entirely different kind.

Whispers of voodoo and demonic spells rip through the streets as the city’s mayor continues to suffer from a strange, zombified coma. What’s more, the town is turning blame on the local fisherman—the very community that helped raise Billie. But it soon becomes clear there are other evils at play, and the three friends know something even more sinister is afoot.

To save the city from this truly terrifying evil, Harry will be forced to pull off his most spectacular escape yet!

Praise for The Magician’s Fire:

“A fast paced mystery. Middle-grade readers […] will gallop through this spellbinder.” —Kirkus

“Nicholson smoothly blends Houdini’s prowess as an escape artist with his fictional hero’s sleuthing skills as he tracks down a missing elderly magician… A cliffhanger ending will leave readers eager for the next installment.” —Publishers Weekly

“Action-packed and fast-paced…will appeal to fans of the ‘39 Clues.’” —School Library Journal

Simon Nicholson writes for Nick Jr. including such shows as Tickety Tock, Bob the Builder, and Zack and Quack, as well as for BBC children’s programming. He lives in London. Visit him online at simonbnicholson.com.

PLEASE WELCOME SIMON TO BOOKHOUNDS YA

The last ten or so books I’ve read. I keep them there to remind me of the most recent stories to have hurried through my brain.

Some of the first things I wrote, in my twenties. I can read them through the gaps between my fingers, but the gaps have to be quite small.

Your new series about Harry Houdini as a boy follows an alternate history of the man.  How did you come up with the idea for this story?

I’ve always been intrigued by Houdini: the tricks; the bravery; the determination to expose hoaxers and fake mediums. I wondered what might have happened to him in his childhood to make him such an extraordinary man. An idea occurred: a series of books for middle-grade readers in which a boy Houdini investigated mysteries, using his emerging escapological skills.

How to do this though? I knew Houdini’s story: how he emigrated to America at the age of four and grew up relatively peacefully with his family in Appleton, Wisconsin. But, on the other hand, I remembered reading a famous biography in which it’s argued that the grown-up Houdini had a double-life, secretly working for US and British intelligence services as a spy. That got me wondering—what if Houdini had also led a “double life” as a boy? What if the few facts we know of his early years—Wisconsin, the peaceful childhood—turned out to have been a cover-up, devised later in order to conceal a far more thrilling and dangerous truth? After all, Houdini was the great master of mystery—it seemed only right to spin one more fantastical tale about him. A tale in which it turns out that, however gripping his adult life, the really exciting stuff happened to him when he was a BOY.

Are there any plans for this series becoming a television project like your other work?

Yes, the screen rights have been sold so more news on this soon!

I always make a plan. I almost always end up changing that plan, or even throwing it away, but I need to have it in the first place, I can’t get started without it. I guess for certain kinds of fiction, you wouldn’t need a plan—but my YOUNG HOUDINI books are tightly-plotted mysteries which  have to build to a massive escape; trying to make that up as you went along would be like Houdini launching into one of his lethal tricks without knowing how he’d pull it off—rather dangerous. These are my children’s guinea pigs, Muffin and Pepsi. Their hutch is near the table where I work and they have watched me write lots of scripts and books. Despite this, they understand nothing about the writing process whatsoever—believe, I’ve asked them.

Excerpt from THE DEMON CURSE by Simon Nicholson

Arthur loosened his tie and pulled in another deep breath. “But where are we? I think it’s safe to say we’re not in New York anymore.”

He stumbled over to the window. Harry and Billie joined him, gripping the windowsill and taking in the scene. More palm trees swept past under a hot, gray sky. The train curved and raced alongside a huge river with a rippling brown surface that glittered in the sun.

“I’d say we must be two hundred miles south at least, given the palms and the high temperature.” Arthur’s voice had steadied, his English tones neat and precise. “I can’t make head or tail of this. Last thing I properly remember, we were back in the theater in New York, helping Harry with his spectacular escape act, and—”

Harry looked down and flinched. There it was, a folded piece of pale green paper, poking out of his jacket pocket. Arthur was already holding out a handkerchief, and Harry used it to gingerly pull the letter out. He, too, thought back to that moment, the three of them sitting in the theater office. He remembered the act the three of them had just performed, full of the usual tricks involving razor-sharp knives, handcuffs, and fire, and finishing with the most spectacular stunt of all, which involved him escaping from a small iron cage that had been plunged deep into a vat of water. Thrilling stuff, Harry thought with another smile. Then he focused on the letter again.

“There was some sort of dust on the paper, which came away on our fingertips. Now I think of it, I remember that too.” Arthur had taken a magnifying glass from his pocket and was peering through it at the letter. “Gone now, by the looks of it. Still, it certainly was powerful—knocked us out cold.”

“It’s not just the paper we need to think about, but also what the letter actually says. That’s pretty odd too,” muttered Harry, reading it one more time.

To Harry, Billie, and Arthur,

You have impressed us greatly. But your
greatest achievements lie ahead of you—we
will make sure of it.

Sent with the consent of the Order of the
White Crow.

“The Order of the White Crow…” Arthur frowned. “Anyone got the faintest idea what that might be?”

“Nope. In fact, there’s not a single bit of that letter that makes much sense, if you ask me,” Billie said. “This sure is a mystery. Reminds me of the time I woke up and discovered I was tied up in the hold of a shrimp boat off South Carolina, been press-ganged into another crummy job obviously, but it didn’t take me long to escape and—watch out !”

Billie flung herself back against the compartment wall, and Arthur did the same. Harry took care to hold his breath and extended his arm so that he was staring at the letter from as far away as possible. Beneath the handwriting, whitish wisps floated from the page, and more words appeared. Harry carried the letter to the window, where the breeze snatched the wisps away, leaving only the words.

PS Congratulations. If you are reading
these additional remarks, then you are
successfully launched on your mission, and
it is safe to reveal more. Regarding the
suitcases, we apologize, but secrecy is vital,
and so we had to smuggle you out of New
York entirely unseen. Concealed airholes
were drilled, a convenient staple was left
near Harry’s hand for when the drugs
wore off—we expect you managed the rest.
Now, you no doubt wish to be told about our
organization and its purpose. Perhaps it is
simplest to say this: It exists to unmask and
defeat evildoing wherever it may lie, and it
seeks to recruit those capable of helping that
noble cause. Prepare yourselves for your
first investigation.

“That’s some letter,” Arthur said, peering over Harry’s shoulder as the last few wisps drifted away. “Not only coated with knock-out chemical dust, but it’s got some kind of light-activated invisible ink on it too.”

“Sure, but what’s it actually saying?” Billie asked. “It says it’s revealing more, but it’s just making things even more confusing, if you ask me.”

“It’s right about the staple.” Harry held the piece of metal up in his other hand. “I’d have found something else to pick the lock anyway, but it was handy bumping into this straightaway.”

“And guess what? Here are the airholes. Rather small, but they’re there.” Arthur tore back the lining in one of the open suitcases, revealing a row of drilled holes. “Still, defeat evildoing—what’s the meaning of that? As for wanting us to carry out some kind of investigation…” He put his head on one side. “Actually, maybe that bit does make sense.”

It does, thought Harry. He closed his eyes, and his thoughts traveled back again, not just to their time at the theater, but also to the rather unusual events that had taken place shortly before. The whole of New York had been baffled by it—the mysterious disappearance of an elderly stage magician from his dressing room in an inferno of purple fire and smoke. No one had been able to solve it, but he, Billie, and Arthur had investigated the business, and after various adventures—including a break-in at a hotel, a terrifying tightrope walk between two ten-story buildings, the discovery of an ingenious secret doorway, and a showdown with one of Manhattan’s most ruthless villains—they had uncovered everything. And all the time, he reminded himself, someone had been watching them, following them…

“I saw him,” Harry muttered, opening his eyes.

“The man who sent us this letter.”

“I remember seeing a man watching us from the street when the letter was delivered. About fifty years old, wearing a pale suit…”

“How do you know it was him who sent it?” Arthur frowned. “Just because he was nearby when it arrived, that doesn’t mean anything.”

“I’d seen him before. When we were carrying out our investigation back in New York, he was following us. I’m sure of it.” He closed his eyes and saw him again. Those piercing gray eyes.