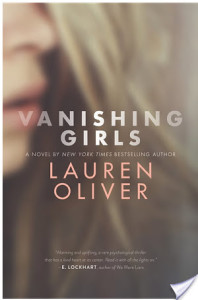 Dara and Nick used to be inseparable, but that was before the accident that left Dara's beautiful face scarred and the two sisters totally estranged. When Dara vanishes on her birthday, Nick thinks Dara is just playing around. But another girl, nine-year-old Madeline Snow, has vanished, too, and Nick becomes increasingly convinced that the two disappearances are linked. Now Nick has to find her sister, before it's too late.

In this edgy and compelling novel, Lauren Oliver creates a world of intrigue, loss, and suspicion as two sisters search to find themselves, and each other.

"Alarming and uplifting, a rare psychological thriller that has a kind heart at its center. Read it with all the lights on." -- E. Lockhart, author of We Were Liars. (less)

Nick (Nicole) and Dara have been in an accident that almost took Dara’s life while Nick was driving. Dara, always the popular and party-girl of the family, now has new insight after this accident. Their neighbor and best-friend-boy-next-door, Parker, has always been there for them. He did hook up romantically with Dara and this left Nick out. Now Nick and Parker are working together at FanLand, the local amusement park for the summer. Dara still has strong feelings for Parker but now Nick is discovering that Parker, while in love with Dara, does not love her.

The recent disappearance of a local nine-year-old girl is the only thing the entire town is paying attention to and all any one talks about, including their newly divorced parents. As the story winds back and forth between the accident, the missing girl and the relationships, we find out exactly what makes Nick and Dara tick. Told in alernating view points between the girls, you can see how their relationship developed and was broken and how they are trying to put everything back together after physical and mental damages.

Yes, that twist, I mentioned. It has nothing to do with the missing girl, although that is resolved. I think a lot people can easily guess at the twist if you caught the E, Lockhart quote in the book. I love Lauren’s work but this one just didn’t catch me at the right time. I did want to smack that plot twist right off the page and in a way I knew it was coming. Parents: there is language, sexual situations, drinking and drugs.

Lauren Oliver comes from a family of writers and so has always (mistakenly) believed that spending hours in front of the computer every day, mulling over the difference between “chortling” and “chuckling,” is normal. She has always been an avid reader.

She attended the University of Chicago, where she continued to be as impractical as possible by majoring in philosophy and literature. After college, she attended the MFA program at NYU and worked briefly as the world’s worst editorial assistant, and only marginally better assistant editor, at a major publishing house in New York. Her major career contributions during this time were flouting the corporate dress code at every possible turn and repeatedly breaking the printer. Before I Fall is her first published novel.

She is deeply grateful for the chance to continue writing, as she has never been particularly good at anything else.

Just live in the US and leave a comment saying HELLO!