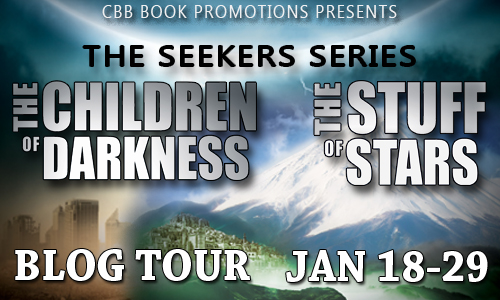 Welcome to my tour stop for The Seekers Series, The Children of Darkness and The Stuff of Stars by David Litwack. This is a science fiction dystopian series from Evolved Publishing.

About The Children of Darkness:

“But what are we without dreams?”
A thousand years ago the Darkness came—a terrible time of violence, fear, and social collapse when technology ran rampant. But the vicars of the Temple of Light brought peace, ushering in an era of blessed simplicity. For ten centuries they have kept the madness at bay with “temple magic,” and by eliminating forever the rush of progress that nearly caused the destruction of everything.
Childhood friends, Orah and Nathaniel, have always lived in the tiny village of Little Pond, longing for more from life but unwilling to challenge the rigid status quo. When their friend Thomas returns from the Temple after his “teaching”—the secret coming-of-age ritual that binds young men and women eternally to the Light—they barely recognize the broken and brooding young man the boy has become. Then when Orah is summoned as well, Nathaniel follows in a foolhardy attempt to save her.
In the prisons of Temple City, they discover a terrible secret that launches the three on a journey to find the forbidden keep, placing their lives in jeopardy, for a truth from the past awaits that threatens the foundation of the Temple. If they reveal that truth, they might once again release the potential of their people.
Yet they would also incur the Temple’s wrath as it is written: “If there comes among you a prophet saying, ‘Let us return to the darkness,’ you shall stone him, because he has sought to thrust you away from the Light.”
Amazon | Goodreads

About The Stuff of Stars:

This second book in The Seekers dystopian series continues the story started in the critically-acclaimed The Children of Darkness.

Against all odds, Orah and Nathaniel have found the keep and revealed the truth about the darkness, initiating what they hoped would be a new age of enlightenment. But the people were more set in their ways than anticipated, and a faction of vicars whispered in their ears, urging a return to traditional ways.

Desperate to keep their movement alive, Orah and Nathaniel cross the ocean to seek the living descendants of the keepmasters’ kin. Those they find on the distant shore are both more and less advanced than expected.

The seekers become caught between the two sides, and face the challenge of bringing them together to make a better world. The prize: a chance to bring home miracles and a more promising future for their people. But if they fail this time, they risk not a stoning but losing themselves in the twilight of a never-ending dream.
Amazon | Goodreads
About the Author:

The urge to write first struck at age sixteen when working on a newsletter at a youth encampment in the woods of northern Maine. It may have been the wild night when lightning flashed at sunset followed by the northern lights rippling after dark. Or maybe it was the newsletter’s editor, a girl with eyes the color of the ocean. But he was inspired to write about the blurry line between reality and the fantastic.Using two fingers and lots of white-out, he religiously typed five pages a day throughout college and well into his twenties. Then life intervened. He paused to raise two sons and pursue a career, in the process — and without prior plan — becoming a well-known entrepreneur in the software industry, founding several successful companies. When he found time again to daydream, the urge to write returned.

David and his wife split their time between Cape Cod, Florida and anywhere else that catches their fancy. He no longer limits himself to five pages a day and is thankful every keystroke for the invention of the word processor.
Website | Facebook | Twitter | Goodreads
Newsletter sign up: http://bit.ly/1ronREk

PLEASE WELCOME TO DAVID to BOOKHOUNDS

At this moment, my nightstand is pretty boring—a bottle of water, a box of tissues and cough drops—since I’m fighting off a cold right now. My desk is more interesting: a pad of yellow post-it notes to scribble down ideas; pictures of my family; the cork from the bottle of champagne we popped to celebrate my first book being published; metallic book ends with a large ‘BO’ on one side and “OK’ on the other, with my five published novels wedged in between. And an extremely messy pile of all the things on my to-do list that I’ve ignored for the past week.

I’d love to have met Tolkien. The world of The Lord of the Rings is so vivid and detailed, I’ve always suspected he might be Gandalf, and the trilogy is just him recording history as he lived it.

People who don’t take responsibility for their own happiness.

Somewhere in between. I find it dangerous to just go with the flow. A novel is a lot of work, and a wrong turn without a sense of where you’re going can lead to months of rewriting. I try to be clear on what my main characters want, and who or what is preventing them from getting it. Basically, I know the beginning and the end, and the makeup of my characters. If I fully understand these, the journey in between can be vague when I start writing, but I can trust my characters to complain if I try to take them too far afield.

I love to start sentences with ‘and’ or ‘but’. I’ve now learned that if I need the conjunction, I should probably just merge it with the prior sentence, and if not, I should delete it. But for some reason, using starting conjunctions has always seemed more dramatic to me (see what I did there). By the final draft, I’ve usually expunged most of them, and my editor takes care of the rest, except for the rare case when the world is needed for emphasis.

GIVEAWAY:
$25 Amazon Gift Card (INT)
+ a second winner wins paperback copies of The Children of Darkness and The Stuff of Stars (US)
Ends Feb. 10
Prizing is provided by the author, hosts are not responsible. Must be 13 or older to enter and have parental permission if under 17. Void where prohibited by law. No purchase necessary to win. 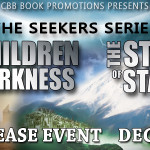