Dillard Early, Jr., Travis Bohannon and Lydia Blankenship are three friends from different walks of life who have one thing in common: none of them seem to fit the mold in rural Tennessee's Forrestville High. Dill has always been branded as an outsider due to his family heritage as snake handlers and poison drinkers, an essential part of their Pentecostal faith. But after his father is sent to prison for sexual abuse of a young parishioner, Dill and his mother become real pariahs. His only two friends are Travis, a gentle giant who works at his family's lumberyard and is obsessed with a Game of Thrones-like fantasy series (much to his alcoholic father's chagrin); and Lydia, who runs a popular fashion blog that's part Tavi Gevinson and part Angela Chase, and is actively plotting her escape from Redneckville, Tennessee.As the three friends begin their senior year, it becomes clear that they won't all be getting to start a promising new life after graduation. How they deal with their diverging paths could cause the end of their friendship. Until a shattering act of random violence forces Dill to wrestle with his dark legacy and find a way into the light of a future worth living.

“[T]his sepia-toned portrait of small-town life serves as a moving testament to love, loyalty, faith, and reaching through the darkness to find light and hope. Zentner explores difficult themes head on—including the desire to escape the sins of the father and the fragility of happiness—while tempering them with the saving grace of enduring friendship.”

“Thorough characterization and artful prose allow readers to intimately experience the highs and lows of these three friends . . . Recommended for fans of John Green and Rainbow Rowell.”

“Characters, incidents, dialogue, the poverty of the rural South, enduring friendship, a desperate clinging to strange faiths, fear of the unknown, and an awareness of the courage it takes to survive, let alone thrive, are among this fine novel’s strengths. Zentner writes with understanding and grace—a new voice to savor.”

“A moving debut novel of friendship and forgiveness that will stick with you long after you’ve finished it, I’m calling it now… The Serpent King is already one of my favorite books of 2016.”

“What you call pride, I call courage.”
― Jeff Zentner, The Serpent King

Travis, Lydia and Dill are pretty much social outcasts in their small Tennessee town of Forestville, which Lydia has renamed ForestVILE since the founder was the original Klansman.  Out of the three of them, Lydia has the most hope, she has a loving family, internet fame with her fashion blog and a solid life ahead of her when she goes off to college.  Travis tends to lose himself in a Game of Thrones type fantasy series when his real life with an alcoholic father who beats him and his mother becomes unbearable.  As the son of a preacher who is now in jail, Dill and his mother barely survive under crushing debt and no hope other than Jesus.  These three come together and with Lydia pushing them all to better themselves, they try to survive senior year and become something other than the small town thinks they should be.

This book started out quietly for me.  I was hooked by the writing and the ability of the author to make you believe in these characters and the horrible lives that the two boys had endured.  Lydia was a unifying force in getting everyone to believe that they could be better and do more with their lives.  It didn’t assault you with the horrors of life that these kids had to endure with endless bullies bating them and small minds of a closed  and set society with a lot of religious overtones. It was all revealed in small outtakes of the daily lives they lived.

This story broke my heart in so many ways and I think it will be one of my favorites of the year because of the depth and courage of the characters.  I don’t want to give away plot points but just when you think these kids will make it the worst happens to one of them and it shakes the other two to take another step into what should be.  I know that sounds vague, but I really hate being spoilery.  In the end, life moves forward to an understandable conclusion that could have gone so wrong but didn’t.  ALL THE FEELS.

Parents: This one is best for teens over 13 because there is a bit of violence (not too graphic) and some language. There is a major discussion about alcoholic parents, drugs causing violent behavior and some sexual tension, but only mentions kissing towards the end. I got so wrapped in the social complexities that I forgot to add this. This would probably spark some excellent discussions about regional socio-economic realities and is perfect for current events. Jeff Zentner lives in Nashville, Tennessee. He came to writing through music, starting his creative life as a guitarist and eventually becoming a songwriter. He’s released five albums and appeared on recordings with Iggy Pop, Nick Cave, Warren Ellis, Thurston Moore, Debbie Harry, Mark Lanegan, and Lydia Lunch, among others.

Now he writes novels for young adults. He became interested in writing for young adults after volunteering at the Tennessee Teen Rock Camp and Southern Girls Rock Camp. As a kid, his parents would take him to the library and drop him off, where he would read until closing time. He worked at various bookstores through high school and college.

He speaks fluent Portuguese, having lived in the Amazon region of Brazil for two years.


WANT TO WIN MY ARC?

Giveaway Ends 3.5.16 and open to all who can legally enter.
US only – must be over 18 or have your parents permission to enter.
An email will be sent and you have 48 hours to reply or a new winner will be chosen.
Winner will be announced within 48 hours at the end of the giveaway. Giveaway is organized by Bookhounds and sponsored by the publisher
It has no affiliation with Facebook, Twitter or any other entitiy.
Void where prohibited. 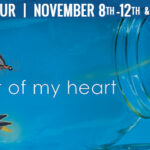