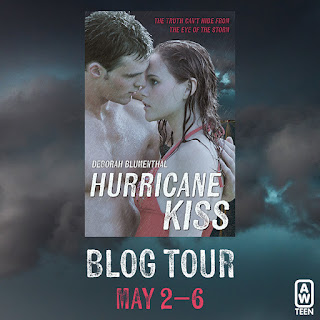 Welcome to Day #1 of the Hurricane Kiss Blog Tour!

To celebrate the release of Hurricane Kiss by Deborah Blumenthal (5/1/16), blogs across the web are featuring exclusive content from Deborah and 5 chances to win a SIGNED copy of Hurricane Kiss, as well as a chance to win a 6-book YA Prize Pack from AW Teen in the Grand Prize Giveaway!

Hurricane Kiss is partly inspired by Deborah’s personal experience evacuating during Hurricane Rita. Today she shares a little bit about that experience with us.

I lived in Houston, Texas for five years in the early 2000s. I loved the city, the people, the food, and the spirit.  What I didn’t love was hurricane season, starting June 1st.

After watching how Hurricane Katrina devastated New Orleans, and seeing so many people lose their homes, I was on high alert.  So just weeks after Katrina when another monster named Hurricane Rita was about to hit us, I knew it was time to flee.  A handyman who had worked on our house came by with wooden boards that entombed our sunny yellow home.  Then I packed up some essential documents, clothes and food, and grabbed my daughter Sophie (our older daughter, Anna, was living on her own in New York), the dog and cat, and we headed for a town not far from Austin.

But like River and Jillian in the book, we got stuck in gridlock. We spent hours sitting in traffic, covering less than twenty miles. The question was what to do? We stopped once for gas and a bathroom break.  Then we got back into the traffic.  I followed the weather and then called my nephew, a meteorologist who lived in San Francisco.  He had won contests predicting the weather, my sister had told me. I remembered that.

I was just minutes from an exit ramp when he answered the phone.  Stay in traffic, or get off and turn around? I asked him.  He went into lengthy descriptions of what he saw on the weather map, but I didn’t have time for particulars.

So I did.  I turned the car around and stepped on the gas.  There were no other cars heading back to Houston. We arrived in minutes.

It turned out he was right.  We spent the night in a hotel in downtown Houston with an interior ballroom along with others who had left their homes, pets in tow.  The next morning we drove home.

Our neighborhood was largely spared. We were lucky.

Stop by A Belle’s Tales tomorrow for Day 2 of the tour and another chance to win!

Blog Tour Schedule:
May 2nd – Bookhounds
May 3rd — A Belle’s Tales
May 4th — Good Choice Reading
May 5th — The Book Cellar
May 6th — A Dream Within A Dream 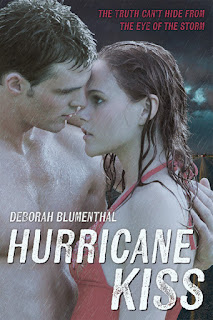 For sixteen-year-old Jillian McKay, the threat of Hurricane Danielle means a long car ride with her neighbors—including River Daughtry, the former star quarterback of Harrison High. The guy who was headed to glory until suddenly he disappeared to a West Texas juvenile detention center. Once cocky and flirtatious, he’s now silent and angry. When their evacuation route is gridlocked, River is the first to recognize the danger they’re in. Together he and Jillian set out to seek shelter in their abandoned high school. As they wait out the storm, they confront the past and realize survival is about more than just staying alive—it’s about fighting for yourself.

About the Author: Deborah Blumenthal is an award-winning journalist with work in many national newspapers and magazines, including the New York Times Magazine. Her other novels include The Lifeguard, Mafia Girl, and A Different Me. She lives in New York City. 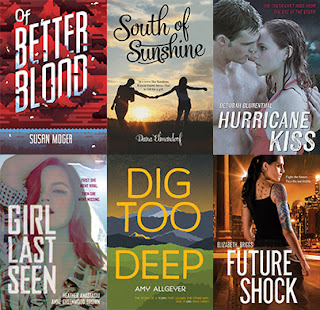 **Giveaway Ends 5. 8.16 and open to all who can legally enter.
US only – must be over 18 or have your parents permission to enter.
An email will be sent and you have 48 hours to reply or a new winner will be chosen. You can also check back here on this page for winner information.  Questions?: BookHounds@hotmail.com
Winner will be announced within 48 hours at the end of the giveaway. Giveaway is organized by Bookhounds and sponsored by the me!
It has no affiliation with Facebook, Twitter or any other entity.
Void where prohibited.**
Not Responsible for lost, stolen or misdirected prizes.