Mikaela left in a snowstorm and Cora stayed behind with all the terrible things they had said to each other at the very end. She swept up the broken glass and the fake flowers – she didn’t remember which one of them had smashed the vase, and it was the least of what had been broken. Then she just kept on cleaning because she didn’t know what else to do with her fury. Once she’d scrubbed the main floor, she went up into the attic, and there she found the hole in the wall – a hole the size of a fist. All the air went out of her; her knees buckled and she had to steady herself in the doorframe to stay upright. She knew what was out there, what might eat its way into your home if you didn’t watch out for it.

“Mikaela!” she screamed, before remembering that Mikaela was gone.

It doesn’t matter what came through the hole. I could think of any number of nasties and build a story around them, but it will only matter if you care about Cora and the fact that Mikaela left. I need you to care about what went wrong between them and whether Mikaela might come back.

I’ve been hooked on spaceships, wizards, zombies and such ever since I can remember, but the worldbuilding is basically scaffolding to hang a human story on. That isn’t to say that the scaffolding is unimportant – if you love SFF, it’s hugely important – but it’s not enough on its own. Buffy the Vampire Slayer was beloved not because of its vampires and cheesy fight scenes, fun as they were, but because of the characters and their relationships, and because the fantasy elements functioned as such perfect metaphors. The high school sitting on the mouth of Hell – how brilliant is that? What makes it work is how real it all is, how recognizable – Once More, With Literal Monsters.

The world of Julia Vanishes is not our world. Julia watched her mother drowned for being a witch, and her own small ability to vanish is nothing compared to the power of the beings she will have to face. I could call the book a murder mystery, and it partly is. Or I could say it’s a story about a girl caught up in a confrontation between dangerous immortals, and it’s that too. But mainly it’s about people letting each other down or propping each other up, loving the wrong guy, choosing who to be when the world seems to have no place for you. It’s the story of a girl in a bind doing something terrible and then dealing with the fallout.

A book might be about aliens or unicorns or sentient rocks, but the beating heart of the story has to be a human heart. You can believe in whatever came through the wall if you can believe that Cora and Mikaela tried and failed to be good to each other and might try again. And I hope you can believe in an otherworldly serial killer if you believe that Julia would lay her life down for her brother. “An exciting novel with magic and serial killers…. One of the hottest books coming out.”—Hypable.com

Fans of Marie Lu, Leigh Bardugo, and Kristin Cashore will be captivated by this stunning first book in a must-have new fantasy trilogy about a spy who can vanish at will and who discovers that monsters, mystery, and magic are also lurking—just out of sight.

Julia has the unusual ability to be . . . unseen. Not invisible, exactly. Just beyond most people’s senses.

It’s a dangerous trait in a city that has banned all forms of magic and drowns witches in public Cleansings. But it’s a useful trait for a thief and a spy. And Julia has learned—crime pays.

She’s being paid very well indeed to infiltrate the grand house of Mrs. Och and report back on the odd characters who live there and the suspicious dealings that take place behind locked doors.

But what Julia discovers shakes her to the core. She certainly never imagined that the traitor in the house would turn out to be . . . her.

Murder, thievery, witchcraft, betrayal–Catherine Egan builds a dangerous world where her fierce and flawed heroine finds that even a girl who can vanish can’t walk away from her own worst deeds. CATHERINE EGAN grew up in Vancouver, Canada. Since then, she has lived on a volcanic island in Japan (which erupted while she was there and sent her hurtling straight into the arms of her now-husband), in Tokyo, Kyoto, and Beijing, on an oil rig in the middle of Bohai Bay, then in New Jersey, and now in New Haven, Connecticut.

She is currently occupied with writing books and fighting dragon armies with her warrior children. You can read more about her at catherineegan.com and follow her on twitter @bycatherineegan.

WANT TO WIN A COPY ?

**Giveaway Ends 6.5.16 and open to all who can legally enter.
US only – must be over 18 or have your parents permission to enter.
An email will be sent and you have 48 hours to reply or a new winner will be chosen.
Winner will be announced within 48 hours at the end of the giveaway. Giveaway is organized by Bookhounds and sponsored by the publisher
It has no affiliation with Facebook, Twitter or any other entitiy.
Void where prohibited.**
Not Responsible for lost, stolen or misdirected prizes.
a Rafflecopter giveaway 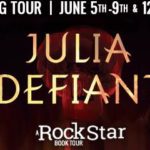