Now available in paperback is the New York Times bestselling debut YA novel FINDING AUDREY (Ember / on sale May 3, 2016 /$9.99) from internationally bestselling author Sophie Kinsella. Kinsella, the author of such favorites as the Shopaholic series, Can You Keep a Secret?, Wedding Night, and Remember Me?, introduced readers to 14-year-old Audrey Turner, a teen in the throes of a severe social anxiety disorder after a bullying incident at school, and following her journey to rediscovering herself and her happiness. Receiving much critical acclaim from reviewers and fans, the book was hailed as “heartfelt,” “engaging,” and “relatable.” The paperback retails for $9.99 and is sure to garner a wider group of fans with this new, accessible edition.

Audrey spends most of her days hiding behind her dark sunglasses and in the safety of her own home, surrounded by her lovable but chaotic family. Interaction with non–family members has been almost impossible to master since the incident at school. But then one day Linus arrives at her house. A friend of her brother’s, Linus makes an instant connection with Audrey and starts to chip away at her exterior, exposing the girl underneath—the girl Audrey herself has been searching for. What results is a tender love story that begins as a friendship and continues in the local Starbucks, where Audrey begins to heal the wounds that have threatened to hold her captive.

Filled with poignancy and laugh-out-loud moments, FINDING AUDREY gives readers a character they can relate to and a family to embrace. Kinsella’s story tackles serious topics with humor and heart and creates the next YA couple to root for in Audrey and Linus.

Audrey is a young teen with a few close friends at school and was a pretty happy.  When the “incident’ occurred, she withdrew from school, had major panic attacks coupled with episodes of depression, all triggered by a group of mean girls that bullied her to tragic consequences.  Although I never found out the actual thing that happened to Audrey, you can imagine it must have been pretty extreme to cause this outcome. She refused to leave the house, wear sunglasses at all time, even when interacting with her family.  Her brothers tend to ground her, the older playing video games and scheming while the younger one is all innocence and sunshine.  With her mother taking a leave from her job, is trying everything to get her daughter back to normal with a desperation boarding on obsessive.

Audrey is so stuck in her own world that the thought of anyone else has been excluded as she sees her therapist who tries to make her move outside that bubble of comfort be using a camera to interact since she can’t face people in real life. I couldn’t really get a good mental picture of her therapist, but I did like how she encouraged Audrey and found ways around the mental blocks that popped up for her.  I think this story was a bit condensed compared to an actual event but it works since I don’t think any teen would want to read 600 pages on therapy.

This book is not depressing, nor is it a clinical look at anxiety and bullying at all.  It was such a story that felt uplifting as Audrey made little strides in getting well.  Her brother’s friend Linus, is the true hero of the story.  He is patient and does the right thing for Audrey even though I don’t think he realizes it.  YAY! Linus.  We need more of that sort in this world.  I can see why some people wouldn’t enjoy this since it is not all sparkly fun like Kinsella’s better known Shopaholic series. It reminded me a bit more of the books she writes under Madeline Wickham, which are a bit more dark but still have a lot of snark.  This book really hit home for me since a similar thing happened to my niece and she left school for a year because of “mean girls”.

Parents:  You will want to read this as well since it should spark some great conversations about the aftermath of bullying.  It is pretty clean with just a little bit of hand holding, some language and a kiss that was really, really necessary! Sophie Kinsella is an international bestselling writer. She is the author of many number one bestsellers, including the hugely popular Shopaholic series. She has also written seven bestselling novels as Madeleine Wickham. She lives in London with her husband and family. Visit her website at www.sophiekinsella.co.uk
“Celebrate May with FINDING AUDREY!”

Giveaway Ends  5.31.15 and open to all who can legally enter.
US only (sorry no po boxes)- must be over 13 or have your parents permission to enter.
An email will be sent and you have 48 hours to reply or a new winner will be chosen.
Winner will be announced within 48 hours at the end of the giveaway. Giveaway is organized by Bookhounds and sponsored by publisher
It has no affiliation with Facebook, Twitter or any other entity.
Void where prohibited.
Not responsible for lost, stolen or damaged prize. 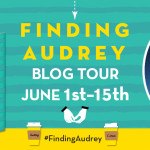