Fate and fortune. Power and passion. What does it take to be the queen of a kingdom when you’re only seventeen?

Maya is cursed. With a horoscope that promises a marriage of Death and Destruction, she has earned only the scorn and fear of her father’s kingdom. Content to follow more scholarly pursuits, her whole world is torn apart when her father, the Raja, arranges a wedding of political convenience to quell outside rebellions. Soon Maya becomes the queen of Akaran and wife of Amar. Neither roles are what she expected: As Akaran’s queen, she finds her voice and power. As Amar’s wife, she finds something else entirely: Compassion. Protection. Desire…

But Akaran has its own secrets — thousands of locked doors, gardens of glass, and a tree that bears memories instead of fruit. Soon, Maya suspects her life is in danger. Yet who, besides her husband, can she trust? With the fate of the human and Otherworldly realms hanging in the balance, Maya must unravel an ancient mystery that spans reincarnated lives to save those she loves the most. . .including herself.

A lush and vivid story that is steeped in Indian folklore and mythology. The Star-Touched Queen is a novel that no reader will soon forget.

Roshani Chokshi comes from a small town in Georgia where she collected a Southern accent, but does not use it unless under duress. She grew up in a blue house with a perpetually napping bear-dog. At Emory University, she dabbled with journalism, attended some classes in pajamas, forgot to buy winter boots and majored in 14th century British literature. She spent a year after graduation working and traveling and writing. After that, she started law school at the University of Georgia where she’s learning a new kind of storytelling.

This is the BEST thing I have read in a long time.  I really didn’t know much about Indian mythology but there were certain elements of the story that reminded me of Egyptian folklore, old European tales and stories that were familiar to me.  The Star-Touched Queen is such a fabulous thing!  It is beautifully written and filled with romance, intrigue and detail, that I can’t remember reading anything this wonderful in months.  My initial thoughts were that it was a retelling of Hades and Persephone (ONCE! ) and mixed with a bit of Beauty and the Beast since the male lead concealed his face for the first part.

Maya, born to a king and cursed with a horoscope that says will be aligned with death, sees no future for herself.  She manages to spy on her father in his meetings and learns that war is imminent.  In order to stave off the war, she is to be married off to the suitor of her choice from the nearby kingdoms.  Her father has additional plans for her though and gives her a poison to take after she makes her choice.  One of the suitors, Amar, steals her away before she can swallow it.

Amar promises her that she will rule a great kingdom and have vast power, what she finds instead is a prison of sorts, waiting for her.  As she journeys through magical places and learns her true destiny, she is tricked by one of her “sisters” into doing something that could be devastating for the entire world.  There is also a bit of comical relief in the form of a horse, Kamala, who eats the dead.  The world building is incredibly intense and happens so swiftly that you would think this world has always existed.   Parents:  this is best for teens since there is a bit of kissing and violence, as well as, death!

2 winners will receive a finished copy of THE STAR TOUCHED QUEEN, US Only. 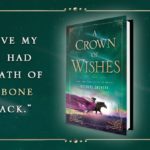