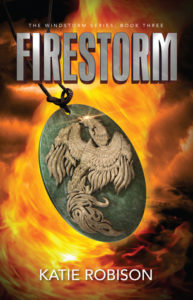 "Why did I possibly think I could do anything to end this war? I was a fool, and now I have one week to get the twins out of here, or I may never see them again."
The seven tribal nations are at war, and as a taporo Kit can finally do something to save her people. But Kit can’t shake the feeling she’s playing a game she doesn’t understand, and if she agrees to fight, she’ll lose the ones she loves the most.
Firestorm is the highly anticipated conclusion of the The Windstorm Series, a fast-paced fantasy trilogy that critics are calling a “thrilling head-rush of an adventure” (Kirkus Reviews).

The water envelopes me. It is everywhere. Heavy, dark, suffocating.

I welcome the suffocation. It means I can’t hear the wind.

A familiar burning enters my lungs and spreads to my head. I don’t have much time.

Turning away from the ever-deepening shades of gray, I swim back to where the light shimmers through the cresting waves and ripples along my arms. I move through an underwater world of sea grass and silver fish. Pretending for a moment that I am one of them, I let the current direct my body toward an unfettered future. The vast energy of the world’s oceans cradles me with surprising gentleness. I close my eyes and feel only the rhythmic swaying of the waves. The soft caress of the sea goddess.

For a heartbeat, I try to remember if I’m dreaming or awake. These days it’s hard to tell the difference between my nightmares and reality. But here everything is so quiet and peaceful; it couldn’t possibly be real life.

And then it’s time to breathe.

I break through the brown-gray surface, drinking in painfully sweet air. As the buzzing in my ears fades, it’s replaced with the cawing of the gulls, the slapping of the water against the inlet’s green islands, and the aching song of the wind.

I look around and try to remember how I got here. Slowly, it comes back to me. I couldn’t sleep. I left the house early, seeking solace from my fiery dreams, and my feet carried me to the ocean.

The waves playfully nudge my shoulders, and I resist the temptation to dive again. Instead, I strike out for shore. When I make it to the beach, I step onto the seaweed-strewn sand and wring out my hair, wipe the salt from my face. In the daylight, the world seems almost kind, my nightmares far away.

I sigh and survey the land around me. Lush green hills, the inlet’s gentle guards, outlined by dark trees and low fences and spattered with sheep and white farmhouses, slope all the way to the water’s edge. A single albatross, magnificently long, stands out against the blue sky.

I pause there for a moment, letting the sun drench my vision, trying to think only of the warmth spilling over my skin and the sand hugging my toes, wanting to exist in this moment and nowhere else. But the peace only lasts for a moment. With my next breath, everything comes crashing back, overwhelming me like the coastal currents that sweep in from the sea.

I left Rye in Mexico. The twins are being drafted. The world is burning.

I blink rapidly and turn toward land. It’s only then that I realize someone is watching me. I snap my eyes up to meet the silent figure standing solid and motionless at the place where the brown sand turns into vibrant grass. His dark hair is in a knot at the nape of his neck, and a single strand brushes his smooth cheekbone, the side without a moko.

“Hi,” Stephen says. Then nothing. He stands there, waiting.

He nods. “I don’t blame you. I came here with the same idea.”

I look at my toes, not sure what to say.

“I wasn’t certain you were coming back up.”

I brave a look at his face, but he’s so practiced at keeping his expressions masked in stone, I never know what he’s thinking. I wonder if he finds me impulsive and irresponsible.

He nods again and looks out across the horizon. There’s something primal about the way he’s standing there, backed by the green hills, the ocean breeze singing in his hair. Like he’s from another time. Then he turns to look at me, and as our eyes lock, I feel like he’s taking me with him, back to the land of the long white cloud, where warriors first walked the uninhabited hills and valleys, where everything was new and anything was possible.

I wrench myself out of the vision with a gasp. Stephen takes a step toward me, but I hold out a hand. “I’m okay.”

He stops. I wait for him to ask me what’s wrong, but he doesn’t, and the two of us stand there while the wind whistles a long-forgotten song. Katie Robison has a Ph.D. in medieval literature from the University of Minnesota and is a registered member of the Ngai Tahu Maori tribe in New Zealand. She lives with her husband, daughter, and Siberian Husky on a lake outside Salt Lake City, Utah.

PLEASE WELCOME KATIE TO BOOKHOUNDS  YA

Six of Crows by Leigh Bardugo, Red Rising by Pierce Brown, The Weight of All Things by Sandra Benitez, and The Daughters by Adrienne Celt. (Plus a bunch of children’s books to read to my toddler!)

A little bit of both. I do a very detailed outline because I need to know where the story is going to end up and how all of the pieces are going to come together. But sometimes a character or plot point will develop organically as I’m writing, and I’ll decide it actually works better that way. So I’ll go back to the outline and incorporate the change into my “road map.” (If I don’t, I run the risk of losing control of the story.) I adopted Mika in 2012. She’s a purebred Siberian Husky, and she’s traveled a lot for a dog! She’s lived in Minnesota, Utah, and the Cayman Islands, and she’s been on several plane rides and cross-country road trips. She loves to give kisses, go on runs, and chase the ducks by our house. And, of course, she adores the snow! Be sure to enter Katie’s giveaway HERE too! **Giveaway Ends 6.17.16 and open to all who can legally enter.
US only – must be over 18 or have your parents permission to enter.
An email will be sent and you have 48 hours to reply or a new winner will be chosen.
Winner will be announced within 48 hours at the end of the giveaway. Giveaway is organized by Bookhounds and sponsored by the publisher
It has no affiliation with Facebook, Twitter or any other entitiy.
Void where prohibited.**
Not Responsible for lost, stolen or misdirected prizes.
a Rafflecopter giveaway 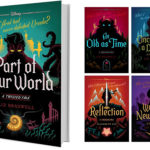