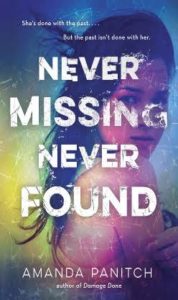 A juicy thriller about a girl who returned from the missing. . . . Hand to fans of We Were Liars, Bone Gap, and Vanishing Girls.  Some choices change everything. Scarlett chose to run. And the consequences will be deadly.  Stolen from her family as a young girl, Scarlett was lucky enough to eventually escape her captor. Now a teen, she's starting a summer job at an amusement park. There are cute boys, new friends, and the chance to finally have a normal life.
Her first day on the job, Scarlett is shocked to discover that a girl from the park has gone missing. Old memories come rushing back. And now as she meets her new coworkers, one of the girls seems strangely familiar. When Scarlett chose to run all those years ago, what did she set into motion? And when push comes to shove, how far will she go to uncover the truth . . . before it's too late?
"With flashbacks that slowly reveal the terrible secret of Scarlett's escape and Pixie's fate, this psychological thriller evokes well-paced fear." --Kirkus Reviews Praise for Amanda Panitch’s YA thriller Damage Done:  “Prepare to be stunned. Prepare to be torn apart.” —Roxane Gay, New York Times bestselling author of Bad Feminist “Teen fans of Gillian Flynn and James Patterson will embrace Damage Done and clamor for more from Panitch.” —Booklist “Exceedingly clever and surprisingly unsettling, Damage Done is an unforgettable read.” —Melissa Marr, New York Times bestselling author of Made for You

Girls who have been abducted seems to be a new theme with media these days and Pantich takes it to the next level.  When Scarlett is nine years old, she is kidnapped and held in a basement where she decided to live and escaped.  Working at a local amusement park she now starts to feel normal but when something another girl there is kidnapped and that has her spinning out of control and back to old feelings when she was captive.

I love the theme part aspect of the amusement park where much of the icidents occur.  The myths of the super heroes are a nice background to this thrilling mystery. The characters also have a bit of depth and you will be surprised that right when you think you have this whole plot figured out there is a twist!  I love that in a book since it is one of my favorite things to predict the way a book ends. Amanda Panitch grew up next to an amusement park in New Jersey and went to college next to the White House in Washington, DC. Amanda now resides in New York City where she works in book publishing by day, writes by night, and lives under constant threat of being crushed beneath giant stacks of books. You can follow her on Twitter @AmandaPanitch, and visit her online at www.amandapanitch.com

**Giveaway Ends 7.7.16 and open to all who can legally enter.
US or Canada only – must be over 18 or have your parents permission to enter.
An email will be sent and you have 48 hours to reply or a new winner will be chosen.
Winner will be announced within 48 hours at the end of the giveaway.
Giveaway is organized by Bookhounds and sponsored by the publisher.
It has no affiliation with Facebook, Twitter or any other entity.
Void where prohibited.**
Not Responsible for lost, stolen or misdirected prizes.