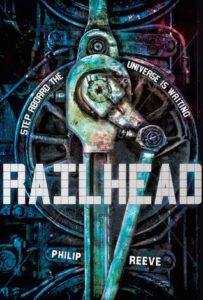 The Great Network is an ancient web of routes and gates, where sentient trains can take you anywhere in the galaxy in the blink of an eye.
But the Network is also a hazardous mess of twists and turns, and nothing is as it seems. So when petty thief and railhead Zen Starling is hired by the mysterious Raven, the job appears simple enough. Steal one small box from the Emperor’s train, live the rest of his days in luxury. Secrets and danger lie in wait on the rails, and that little box might just bring everything in this galaxy—and the next—to the end of the line.

Philip Reeve wrote his first story when he was just five years old, about a spaceman named Spike and his dog, Spook. Philip has continued writing and dreaming up adventures and is now the acclaimed author of the Mortal Engines series, the Fever Crumb series, Here Lies Author (2008 Carnegie Medal Winner), and many other exciting tales. Born and raised in Brighton, England, Philip first worked as a cartoonist and illustrator before pursuing a career as an author. He lives in Dartmoor with his wife, Sarah, and their son, Sam.

Zen Starling survives by stealing small objects and fencing them to Uncle Bugs (who is really a hive of bugs in humanoid form) while his mother deals with her mental issues and his sister works as a factory laborer.  He is also a “Railhead” who loves to travel on the trains that connects the worlds together by tunnels called K-Gates which propel the cars through hyperspace.  When a mysterious man named Raven asks him to steal a mysterious box, his life becomes extremely complicated and pulled into political intrigue that could destroy the universe.
This is one of those books that will truly capture your imagination.  As with all Science Fiction, world building can make or break a story and this one is so seemless that you will think all of these places exist and trains really can take you to a new planet.   The other characters are perfectly placed so you have a heroine in the form of a robot, named Nova, who wishes to be human.  There is also an ambigous anti-heroine that is in line to be Empress and Threenody is that one character who has the will to do right, but can she?
The future certainly looks bright but with elements of mythology like Greek Gods involved, everything becomes tricky.  I was racing along trying to figure out if Zen would suvive Raven’s machinations and Threenody’s good side would help him or kill him.  I can’t even explain how much I loved this book.  If you are up for a political thriller with a Sci-Fi background, then you have found your next favorite thing.