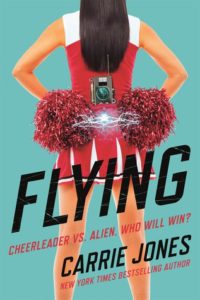 New York Times bestselling author Carrie Jones introduces sassy alien-hunting cheerleader Mana in Flying, the launch of a sparkling new YA SF series.
People have always treated seventeen-year-old Mana as someone in need of protection. She's used to being coddled, being an only child, but it's hard to imagine anything could ever happen in her small-town, normal life. As her mother's babying gets more stifling than ever, she's looking forward to cheering at the big game and getting out of the house for a while.
But that night, Mana's life goes haywire.
First, the hot guy she's been crushing on at school randomly flips out and starts spitting acid during the game. Then they get into a knockdown, drag-out fight in the locker room, during which Mana finds herself leaping around like a kangaroo on steroids. As a flyer on the cheerleading squad, she's always been a good jumper, but this is a bit much. By the time she gets home and finds her house trashed and an alien in the garage, Mana starts to wonder if her mother had her reasons for being overprotective.
It turns out, Mana's frumpy, timid mom is actually an alien hunter, and now she's missing--taking a piece of technology with her that everyone wants their hands on, both human and alien. Now her supposed partner, a guy that Mana has never met or heard of (and who seems way too young and way too arrogant to be hunting aliens), has shown up, ordering Mana to come with him. Now, on her own for the first time, Mana will have to find a way to save her mother--and maybe the world--and hope she's up to the challenge.

Men In Black Bring IT On!

This is just the perfect book for light summer reading.

Mana is a “flyer” in cheerleading.  The one who the other cheerleaders toss in the air.  Those girls are usually excellent at tumbling and gymnastics and tiny things.  When Mana comes home and finds her house ransacked and her mother gone, she panics and reaches out to her two neighbors September (Seppie) and Lyle.  The cute boy she crushes on, Dakota, starts spitting acid and becomes all lizard-like totally ruins her day.

China, who is her mother’s partner, let’s the kids in on the world’s best kept secret: Aliens are real and have been here for ages.  He is a mysterious character and you are never quite sure if he is good or evil, but since he works with Mana’s mom, he has to be sort of good.  The adventure just grows from there as Mana and China tries to find her mother.  I really enjoyed the whole adventure.

Overall, Jones does an excellent job bringing the aliens and teens to life with all the action and adventure of a summer teen movie.  I have read all of Jones’ work and have never found them lacking.  The only thing she really needs to do is a dog book.  Parents:  This one is probably safe for even younger teens since there is only cartoon violence, some language and a few kisses.

CARRIE JONES is the New York Times and internationally bestselling author of the Need series, as well as After Obsession with Steven E. Wedel. She is a distinguished alum of Vermont College’s MFA Program, and a part-time police dispatcher in Maine because she likes cop stories. Really.
*****

**Giveaway Ends 7.19.16 and open to all who can legally enter.
US only – must be over 18 or have your parents permission to enter.
An email will be sent and you have 48 hours to reply or a new winner will be chosen.
Winner will be announced within 48 hours at the end of the giveaway. Giveaway is organized by Bookhounds and sponsored by the me!
It has no affiliation with Facebook, Twitter or any other entity.
Void where prohibited.**
Not Responsible for lost, stolen or misdirected prizes.
a Rafflecopter giveaway