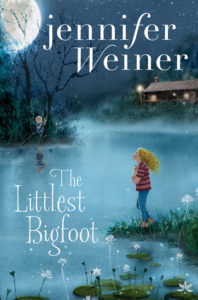 From New York Times bestselling author Jennifer Weiner comes a laugh-out-loud funny and painstakingly real tale of friendship, furry creatures, and finding the place where you belong.
Alice Mayfair, twelve years old, slips through the world unseen and unnoticed. Ignored by her family and shipped off to her eighth boarding school, Alice would like a friend. And when she rescues Millie Maximus from drowning in a lake one day, she finds one.
But Millie is a Bigfoot, part of a clan who dwells deep in the woods. Most Bigfoots believe that people—NoFurs, as they call them—are dangerous, yet Millie is fascinated with the No-Fur world. She is convinced that humans will appreciate all the things about her that her Bigfoot tribe does not: her fearless nature, her lovely singing voice, and her desire to be a star.
Alice swears to protect Millie’s secret. But a league of Bigfoot hunters is on their trail, led by a lonely kid named Jeremy. And in order to survive, Alice and Millie have to put their trust in each other—and have faith in themselves—above all else.

Alice is an awkward twelve-year-old, that at times, is pushed around by her peers and changes schools trying to fit in.   Millie is another outcast for similar reasons except that she belongs to the Yare tribe which is really another type of being which we know as Bigfoots.  Unfortunately for Millie, she is the smallest of all the Bigfoots and doesn’t fit in with them at all.  Both Alice and Millie both yearn for knowledge and want to fit someplace.  When Alice transfers to a school in upstate New York near a lake, she finds Millie drowning and saves her.

Millie hides her appearance from Alice until she no longer can but by then, the two have grown close. When the outside world, in the form of a boy, tries to hunt down the Yare tribe, Alice and Millie band together to stand up to keep their secrets.  This is a true story of friendship, acceptance, and growing that come with being a preteen.  The story reflects on several different themes about being different, bullies and how to work together.  It also contains a lot of humorous elements and leaves an opening for a follow-up.  Jennifer Weiner is one of my favorite authors and she has done a great job entering the middle-grade scene.

Jennifer Weiner is the #1 New York Times bestselling author of fourteen books, including Good in Bed, In Her Shoes, which was made into a major motion picture, and Who Do You Love. A graduate of Princeton University and contributor to the New York Times Opinion section, Jennifer lives with her family in Philadelphia. Visit her online at JenniferWeiner.com.

**Giveaway Ends 9.22.16 and open to all who can legally enter.
Open to residents of the US Only
Must be over 18 or have your parents permission to enter.
An email will be sent and you have 48 hours to reply or a new winner will be chosen.
Winner will be announced within 48 hours at the end of the giveaway.
Giveaway is organized by Bookhounds and sponsored by the publisher
It has no affiliation with Facebook, Twitter or any other entity.
Void where prohibited.**
Not Responsible for lost, stolen or misdirected prizes.