The Charming Life of Izzy Malone by Jenny Lundquist

Izzy Malone isn’t your typical sixth grader. She wears camouflage combat boots and tie dye skirts; the Big Dipper and Orion are her two best friends; and she’d rather climb trees or shoot hoops than talk about boys and makeup. And after only a month of middle school she’s already set the record for the most trips to the Principal’s office.

The only time Izzy feels at peace is when she’s on the open water, and more than anything else, she wants to become a member of the Dandelion Paddlers, her school’s competitive rowing club. But thanks to those multiple trips to the Principal’s office, Izzy’s parents force her to enroll in Mrs. Whippie’s Charm School, a home-study course in manners and etiquette, or they won’t let her race in Dandelion Hollow’s annual pumpkin regatta—where Izzy hopes to prove to the Dandelion Paddlers she is more than qualified to be on their team.

When Mrs. Whippie’s first letter arrives it’s way different from what Izzy was expecting. Tucked inside the letter is a shiny gold bracelet and an envelope charm. Izzy must earn her first charm by writing someone a nice note, and once she does more tasks will be assigned.

Izzy manages to complete some of the tasks—and to her surprise, she actually finds herself enjoying the course. But when one of her attempts at doing something good is misinterpreted, she fears her chances at passing the course—and becoming a Paddler—are slipping away. With some unexpected friends there to support her, can Izzy manage to earn her charms and stay true to herself?

Praise for the Book:

“Izzy’s frank, vulnerable, sassy first-person narration reveals her surprising journey from a solitary girl talking to the stars to a girl with friends to light her way…This story of an atypical girl, her family, and friends, laced with middle school drama, is indeed a charming one.” –Kirkus Reviews

“A heartwarming coming-of-age journey…Lundquist deftly portrays the pain of being odd girl out, both at school and at home.” –Publisher’s Weekly

Mom opened the letter, and sure enough, I was right.
“It’s from Ms. Harmer. It says you frequently refuse to follow instructions.” She paused, and said, “Well?”
I frowned. “Well, what?”
“Well—what do you have to say for yourself?”
“I guess I would say…instructions are for kids who have no imagination.”
Mom sighed loudly and ran a hand through her hair, but behind her back Carolyn grinned and gave me a thumbs up.
“What? You told me to say something, so I did.”
Mom read the letter again. “Apparently you were supposed to write an essay about a famous poet, and instead you turned in a story.”
“So what? Ms. Harmer didn’t actually say it had to be a real life famous poet—so I made one up.” If you ask me, what I did was actually harder; and, the best part of all, it only took me fifteen minutes. I wrote a story about a poet named Wanda Wordsmith who went fishing for her poems. Except instead of a fishing pole, she used a kite to catch her words on the wind. I thought it was a great story, and deserved an A. But apparently The Hammer thought it deserved a note home, which made no sense to me at all. Sometimes I think teachers like Ms. Harmer view creativity as something dirty and slightly embarrassing, and would prefer to turn kids into people who color inside the lines.
Generally speaking, I don’t care much for lines.

Author Jenny Lundquist
Jenny Lundquist was born and raised in Huntington Beach, CA, where she spent her time unsuccessfully learning how to surf. When she was younger, she wanted to be either a rock star or a published author. After she taped herself singing and listened to it on playback she decided she’d better opt for the writing route. Jenny is the author of Seeing Cinderella and Plastic Polly as well as the young adult titles The Princess in the Opal Mask and The Opal Crown. 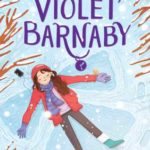