Jack Templar and the Last Battle by Jeff Gunhus

In the last book of the Jack Templar series, Jack and his friends race to stop Ren Lucre before he launches this Creach army against humankind. But the Lord of the Lesser Creach and the Lord of the Zombies hold the last two Jerusalem Stones Jack needs to have any chance of success. To make matters worse, the Oracle predicts that one of their group will die in the upcoming fight, and Jack discovers betrayal among those he trusts most.

Even so, Jack must find the courage to lead his friends into battle. Either they collect the Stones in time to defeat Ren Lucre or die trying. It’s “Do your duty, come what may” no matter the cost. The fate of the world hangs in the balance.

Jeff Gunhus is the USA TODAY bestselling author of thriller and horror novels for adults and the middle grade/YA series, The Templar Chronicles. The first book, Jack Templar Monster Hunter, was written in an effort to get his reluctant reader eleven-year-old son excited about reading. It worked and a new series was born. His books for adults have reached the Top 30 on Amazon, have been recognized as Foreword Reviews Book of the Year Finalists and reached the USA TODAY bestseller list.

After his experience with his son, he is passionate about helping parents reach young reluctant readers and is active in child literacy issues. As a father of five, he leads an active life in Maryland with his wife Nicole by trying to constantly keep up with their kids. In rare moments of quiet, he can be found in the back of the City Dock Cafe in Annapolis working on his next novel or on JeffGunhus.com. 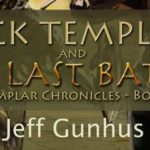