In this contemporary mystery by debut author Sheryl Scarborough, a teenage girl uses forensic science to solve the cold-case murder of her mother

Erin Blake has one of those names. A name that, like Natalee Holloway or Elizabeth Smart, is inextricably linked to a grisly crime. As a toddler, Erin survived for three days alongside the corpse of her murdered mother, and the case—which remains unsolved—fascinated a nation. Her father’s identity unknown, Erin was taken in by her mother’s best friend and has become a relatively normal teen in spite of the looming questions about her past.

Fourteen years later, Erin is once again at the center of a brutal homicide when she finds the body of her biology teacher. When questioned by the police, Erin tells almost the whole truth, but never voices her suspicions that her mother’s killer has struck again in order to protect the casework she’s secretly doing on her own.

Inspired by her uncle, an FBI agent, Erin has ramped up her forensic hobby into a full-blown cold-case investigation. This new murder makes her certain she’s close to the truth, but when all the evidence starts to point the authorities straight to Erin, she turns to her longtime crush (and fellow suspect) Journey Michaels to help her crack the case before it’s too late. Sheryl Scarborough worked as a story writer and series developer in children’s television before receiving her MFA in Writing for Children & Young Adults from Vermont College, where she studied under Rita Williams-Garcia, Tom Birdseye, and Susan Fletcher, among others. She currently lives and works in Kalama, Washington. To Catch a Killer is her debut.

**Giveaway Ends 2.20.17 and open to all who can legally enter.
Open to residents of the US / Canada
Must be over 18 or have your parents permission to enter.
An email will be sent and you have 48 hours to reply or a new winner will be chosen.
The Winner will be announced within 48 hours at the end of the giveaway.
Giveaway is organized by Bookhounds and sponsored by the Publisher (email Bookhounds@hotmail to verify if you won!)
It has no affiliation with Facebook, Twitter or any other entity.
Void where prohibited.**
Not Responsible for lost, stolen or misdirected prizes. 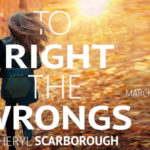