Will has no choice. His father drags him along on a wilderness adventure in the footsteps of legendary explorers Lewis and Clark–whether he likes it or not. All the while, Will senses that something about this trip isn’t quite right.

Along the journey, Will meets fascinating strangers and experiences new thrills, including mountain cliffs, whitewater rapids, and a heart-hammering bear encounter.

It is a journey into the soul of America’s past, and the meaning of family in the future. In the end, Will must face his own, life-changing test of courage.

A father-and-son journey along the Lewis and Clark Trail–from Fort Mandan to the shining sea–offers readers a genre-bending blend of American history, thrilling action, and personal discovery.

Praise for THE COURAGE TEST

“Preller stirs doses of American history into a first-rate road trip that does traditional double-duty as plot device and coming-of-age metaphor. Will is initially baffled and furious at being abruptly forced to accompany his divorced father, a history professor, on a long journey retracing much of the trail of Lewis and Clark. …Will survives a meeting with a bear and a spill into dangerous rapids—tests of courage that will help him weather the bad news that awaits him at home.” —Booklist

“Whatever young explorers look for on their literary road trips, they’ll find it here.”–Bulletin of the Center for Children’s Books

“The lively narrative is interspersed with Will’s entries for a school writing assignment, which contain lots of facts about the original journey, as well as postcards to his mother. Despite the emotional heft, there is plenty of action, including white-water rafting and a close encounter with a bear. A middle grade winner to hand to fans of history, adventure, and family drama.”–School Library Journal

EXCERPT
My mother pushes me out the door, and I don’t know why.

She might as well say what every parent resorts to when they run out of good answers: Because I said so. There’s no explanation, no more discussion. It’s time for me to go.

I feel ridiculously, stupidly, helplessly annoyed, and there’s nothing I can do about it. I see in that instant my mother is getting old. Stray gray hairs, wrinkles around the down-turned corners of her mouth. She looks tired and thin, sick of arguing with me. I carry a fully loaded metal-frame backpack on my shoulders and a smaller gym bag in my right hand—stuff for the long drive, all my technology’s in there. I don’t want to go, but I can’t stand here forever. So come on, Mom, let’s do this.

“You’ll have fun,” she says. “It’s good for you and your father to spend time together.”

“He’s the only father you’ve got,” she says.

I give her nothing in return. Not a nod. I’m not even listening. I turn my back to her.

I raise my hand in good-bye without looking back.

My father waits in the car. He steps out as I approach. I nod to him, hey. None of this is my idea. I have no say, no choice. I refuse to be happy about it. I’m not going to make this easy.

“Here, um, let me help you with that.” He reaches to take my backpack.

He stands there, not knowing what to do.

“Are you going to pop the trunk?” I ask. Because: obviously.

Flustered, my father moves to the driver’s side door. He fumbles in the front pocket of his water-resistant khakis, drops the keys on the road, stoops to the ground. I glance sideways, slyly, to check how this is playing from the front window. But my mother is no longer watching. James Preller (born 1961) is the children’s book author of the Jigsaw Jones Mysteries, which are published by Scholastic Corporation. He grew up in Wantagh, New York and went to college in Oneonta, New York. After graduating from college in 1983, James Preller was employed as a waiter for one year before being hired as a copywriter by Scholastic Corporation, where he was introduced (through their books) to many noatable children’s authors. This inspired James Preller to try writing his own books. James Preller published his first book, entitled MAXX TRAX: Avalanche Rescue, in 1986. Since that time, James Preller has written a variety of books, and has written under a number of pen names, including Mitzy Kafka, James Patrick, and Izzy Bonkers. James Preller lives in Delmar, New York with his wife Lisa and their three children. 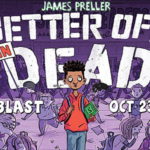 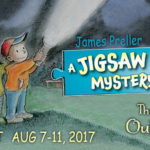