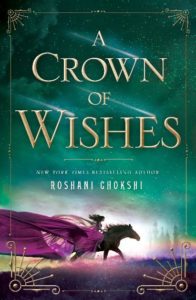 Gauri, the princess of Bharata, has been taken as a prisoner of war by her kingdom’s enemies. Faced with a future of exile and scorn, Gauri has nothing left to lose. Hope unexpectedly comes in the form of Vikram, the cunning prince of a neighboring land and her sworn enemy kingdom. Unsatisfied with becoming a mere puppet king, Vikram offers Gauri a chance to win back her kingdom in exchange for her battle prowess. Together, they’ll have to set aside their differences and team up to win the Tournament of Wishes—a competition held in a mythical city where the Lord of Wealth promises a wish to the victor.
Reaching the tournament is just the beginning. Once they arrive, danger takes on new shapes: poisonous courtesans and mischievous story birds, a feast of fears and twisted fairy revels.
Every which way they turn new trials will test their wit and strength. But what Gauri and Vikram will soon discover is that there’s nothing more dangerous than what they most desire.

Roshani Chokshi proved herself an author to watch with her young adult fantasy debut last spring, The Star-Touched Queen. Debuting at #4 on the New York Times bestseller list, the novel received rave reviews from fans and critics alike and appeared on the most buzzed about lists of 2016. Chokshi once again writes a beautifully crafted story of adventure, love, and magic set in the Star-Touched world with her sophomore novel A CROWN OF WISHES (St. Martin’s Griffin; 3/28/17). Building on her intricate setting based on ancient India and Greek mythology, her follow-up is a novel spun from enchantment with a strong female heroine and a swoony worthy prince who team up to win back the thrones of their kingdoms.

LISTEN TO AN AUDIO CLIP

Vikram is moments away from becoming king when he decides the kingdom needs a better hope and a need to avoid war.  When Gauri is thrown out of her kingdom, she needs more than a chance, she needs some sort of magic wish.  Vikram receives an invitation for a chance at a wish in a tournament of magic.  He can bring one person who will also have a chance at a wish, so of course, he brings Gauri and the pair begin their quest. The two bicker throughout their trials with Gauri barely tolerating him as a weak partner.  There is just something so perfect at the balance between these two characters.

There are touches of Wonderland with one drink making them smaller and one larger in a figurative way.  The imaginary is just spectacular.  Each distinct part of the story had a wonderful vista you wanted to visit and stay for awhile.  I am not a big descriptive person but everything was just perfectly done.  I know the story is a basic romance with the girl hating on the boy but then they discover they are perfect for each, but oh! that trip through their world.

I swooned over The Star Touched Queen and this is just as good!  Parents:  nothing was overall graphic but there are some sexual situations, some violence, and this will be something you will want to read as well.  I am now waiting for this author to publish something every year or sooner! Roshani Chokshi comes from a small town in Georgia where she collected a Southern accent but does not use it unless under duress. She grew up in a blue house with a perpetually napping bear-dog. At Emory University, she dabbled with journalism, attended some classes in pajamas, forgot to buy winter boots and majored in 14th century British literature. She spent a year after graduation working and traveling and writing. After that, she started law school at the University of Georgia where she’s learning a new kind of storytelling. 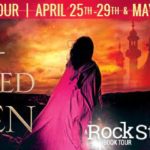