Welcome to TEAM MASTERMIND!  The scavenger hunt for THE LAST MAGICIAN! Please check back each Monday afternoon for the next clue in this hunt.  You will need those clues to get all of your entries!  This week is a QUIZ to see how your affinity will manifest. Be sure to stop by the blogs listed at the end of this post for more chances at clues and find out about TEAM SPY, TEAM ASSASSIN AND TEAM THIEF. In modern day New York, magic is all but extinct. The remaining few who have an affinity for magic—the Mageus—live in the shadows, hiding who they are. Any Mageus who enters Manhattan becomes trapped by the Brink, a dark energy barrier that confines them to the island. Crossing it means losing their power—and often their lives.

Esta is a talented thief, and she’s been raised to steal magical artifacts from the sinister Order that created the Brink. With her innate ability to manipulate time, Esta can pilfer from the past, collecting these artifacts before the Order even realizes she’s there. And all of Esta’s training has been for one final job: traveling back to 1902 to steal an ancient book containing the secrets of the Order—and the Brink—before the Magician can destroy it and doom the Mageus to a hopeless future.

But Old New York is a dangerous world ruled by ruthless gangs and secret societies, a world where the very air crackles with magic. Nothing is as it seems, including the Magician himself. And for Esta to save her future, she may have to betray everyone in the past. Lisa Maxwell is the author of Sweet Unrest, Gathering Deep, Unhooked, & The Last Magician (Simon Pulse, Spring 2017). When she’s not writing books, she’s an English professor at a local college. She lives near DC with her very patient husband and two not-so patient boys.

Join The Devil’s Own Street Team!

Are you are a reader or blogger interested in being a part of The Devil’s Own, a group of readers who will compete with one another to win exclusive swag and prizes as we spread the word about THE LAST MAGICIAN?

If you’re interested in being contacted in April, fill out the form below! I might not have been born in this city, but I’ve struggled and fought and now it’s mine. Or at least a good portion of it is. My family came to this country when I was eight. When I was twelve, my leg was crushed in some machinery at the factory where I worked. My mangled leg meant I couldn’t work, and without my wages, I was a drain on my family. So I left. I figured I’d either live or die on the streets, but either way it would be on my own terms. But I didn’t die—I thrived. By the time I was fourteen, I’d collected a group of other boys to run with, and we called ourselves the Devli’s Own. By the time I was nineteen, I’d already met Leena and saw the direction my life was going to take. Now, I own the boxing club named after my crew, the Bella Strega, and a series of other holdings in the Bowery. No one doubts my power in the city, but I prefer to keep a low profile. Stick out your neck and you’re liable to find a noose around it.

Power. The way the city feels at night, dark and secretive and filled with promise. Sitting at the back table at the Strega and watching all that I’ve built.

The Order. People who waste my time. Betrayal.

I’m the leader of the Devil’s Own. There are many in the streets around the Bella Strega who depend upon me and my gang, and I take my responsibilities to them seriously. But then, I also take their debts to me seriously as well. My affinity? Let’s just say there’s a reason why everyone who vows loyalty to me wears my mark.

Success comes to those brave enough to use the threat of death to carve out a life worth having. 2 winners will receive a signed/personalized ARC’s of THE LAST MAGICIAN, US Only.
a Rafflecopter giveaway 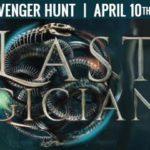