Hello Readers! Welcome to the Release Day Celebration for

Be sure to enter the giveaway found at the end of the post.

When the clocks in town stop, thirteen-year-old CJ discovers an unusual “clock world” where most of the citizens are clock parts, tasked with keeping the big clocks running. But soon the seemingly peaceful world is divided between warring factions with CJ instructed to find the only person who can help: the elusive Tick Tock Man.

With the aid of Fuzee, a partly-human girl, he battles gear-headed extremists and razor-sharp pendulums in order to restore order before this world of chimes, springs, and clock people dissolves into a massive time warp, taking CJ’s quiet New England town with it.

I went to the spare bedroom and grabbed the box for Uncle Artie’s clocks. I replaced them one by one, starting with the crescent moon clock. After the German village cuckoo clock made its way into the box, I noticed something extra strange. All Uncle Artie’s clocks were stuck at two o’clock. How come no one else noticed this? That question troubled me as I put the box of clocks in its resting place. It was as if those clocks had something to say but couldn’t say it.

When I came back down I gave the Hoffhalder another hard look, this time from the other side of the room. As much as I tried to convince myself this was just a clock, I knew that wasn’t the case. It spoke to me, although I couldn’t completely understand it.

Things were going from strange to downright weird.

R.M. Clark is a computer scientist for the Dept. of Navy by day and children’s book writer by night. He lives in Massachusetts with his wife and two sons. 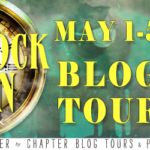