What began with a reimagining of Peter Pan and Wendy now twists into a stunning version of Alice’s Adventures in Wonderland and Through the Looking-Glass!

Gwen, Pete, and the others have escaped from Everland. But the safe haven they hoped to find at Alnwick Castle doesn’t exist. With the Queen of England on her deathbed, Duchess Alyssa has stepped in to lead, but things have gotten worse as the cure Doc created for the Horologia virus has mutated, accelerating the disease. The only possible solution he can think of is to go back to the virus’s origin: an extinct poisonous apple.

Legend has it a tree bearing the apple might be found at the center of a deadly labyrinth hidden deep within Germany. A place that no one in their right mind enters. Leaving Pete in charge of the survivors, Alyssa sets out with only her sword, her wits, and the help of Maddox Hadder, a wild boy who oversees the castle gardens. To get to the center of the maze, she’ll be forced to battle monsters more terrifying than her darkest nightmares.

But can anyone truly survive the madness of the maze? And what if there’s no apple to be found there? Forget the story of Peter Pan you know. Because in Everland, the only way to grow up is to survive.
London has been destroyed in a blitz of bombs and disease. The only ones who have survived are children, among them Gwen Darling and her siblings, Joanna and Mikey. They spend their nights scavenging and their days avoiding the ruthless Marauders — the German Army led by Captain Hanz Otto Oswald Kretschmer.
Unsure if the virus has spread past England’s borders but desperate to leave, Captain Hook hunts for a cure, which he thinks can be found in one of the survivors. He and his Marauders stalk the streets snatching children for experimentation. None ever return. Until the day they grab Joanna. As Gwen sets out to save her, she meets a mysterious boy named Pete. Pete offers the assistance of his gang of Lost Boys and the fierce sharpshooter Bella, who have all been living in a city hidden underground. But in a place where help has a steep price and every promise is bound by blood, it will cost Gwen. And are she, Pete, the Lost Boys, and Bella enough to outsmart Captain Hook? I must admit, I have lived an extraordinary life and will forever be grateful for the opportunities I have had.

I was the middle of three kids, my older brother being deaf for as far back as I can remember. At the time, I didn’t realize how much that would later impact my life. I was a sign language interpreter for a short time (although I’m extremely rusty now), taught my kids to sign as infants, and now am using that experience in my current manuscript.

During college I was living in southern California working for Disneyland as a Cast Member in the Entertainment Department. I met my husband there who was also a performer. After four incredible years working with the Mouse, we moved to his hometown in the Bay Area.

I eventually got my Bachelor’s in Kinesiology and worked in the fitness industry for ten years before a knee injury ended my career. Not sure what to do with my time, I applied to job posting to be an online journalist. I loved writing, but had no experience. I didn’t hear back so I wrote up a review about a local restaurant and sent it to them to prove I could do the job. Twenty-four hours later, I was a journalist with AOL Media/Pleasanton Patch.

I spent three great years with them before cut backs forced me without a job again. That’s when I started writing my first novel, which went nowhere. Dozens of rejection letters later. I started a second book. A year later I was offered representation by Thao Le from Sandra Dijkstra Literary Agency and within another six months I was offered a book deal. EVERLAND (Scholastic) is scheduled to debut Summer of 2016!

Today I live in the Bay Area with my husband and three sons who are my biggest fans. While they’re off at work and school, I bounce ideas off my four-legged, furry family members, Odie and Sammy.

Alyssa and her crew are desperately trying to find the cure for the Horologia virus which Doc is working on day and night.  As Gwen suffers from the disease and Pete with the others try to keep everyone safe, Alyssa thinks that the cure might be found in the Poison Garden once tended by Maddox Hadder.  Princess Katt is a thorn in Alyssa side and Alyssa has to work around her baiting into order to find the cure.  Maddox knows exactly what started the virus since his parents once tended the Poison Garden.  Maddox and Alyssa find themselves working on the cure together as unlikely allies through a maze of deadly consequences.

Everland sets up the battle in Umberland and again the story is told alternating viewpoints.  While Everland was a retelling of Peter Pan, Umberland morphs easily into a retelling of Alison in Wonderland.  You don’t need to read Everland to enjoy Umberland and in some ways , they are completely different stories.  If you enjoy Once A Upon a Time, this book will give you the same vibe.

3 winners will receive a finished copy of UMBERLAND, US Only. 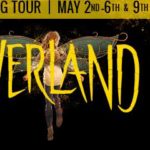