Per her 537 rules, Harper Campbell keeps her life tidy—academically and socially. But the moment Sterling Lane transfers into her tiny boarding school, her twin brother gets swept up in Sterling’s pranks and schemes and nearly gets expelled. Harper knows it’s Sterling’s fault, and to protect her brother, she vows to take him down. As she exposes his endless school violations, he keeps striking back, framing her for his own infractions. Worst of all, he’s charmed the administration into thinking he’s harmless, and only Harper sees him for the troublemaker he absolutely is.

As she breaks rule after precious rule in her battle of wits against Sterling and tension between them hits a boiling point, she’s horrified to discover that perhaps the two of them aren’t so different. And maybe she doesn’t entirely hate him after all. Teaming up with Sterling to save her brother might be the only way to keep from breaking the most important rule—protecting Cole. Ingrid Paulson does not, in fact, loathe anyone. Although the snarky sense of humor and verbal barbs in Why I Loathe Sterling Lane might suggest otherwise (and shock those who think they know her best).

Ingrid lives in San Francisco with her husband and children and enjoys long-distance running, eavesdropping, and watching science documentaries. She has always loved books and writing short stories, but was surprised one day to discover the story she was working on wasn’t so short any more. Valkyrie Rising, a paranormal girl power story was Ingrid’s first novel. Expect another humorous contemporary romance to join the list soon. Do you plan your books in advance or just see what happens?

I wish I could say I plan, because outlines make revising SO much easier.  However, I am 100% a pantser.  I generally start out with vague idea of who the characters will be, then I spend some time tinkering with a few pages to get the voice down.  If I’m struggling with the voice, I’ll sit and write a few sentences about the character—what motivates them, what do they hate, and what do they most want to hide. I often get as granular what do they carry in their purse. It’s amazing how fleshing out a character can inform the story or make it easier to get “in character,” particularly if you’re writing from a first person point of view.

Because I’m character driven, the story is often tugged along by the characters and what they want. Everyone has an agenda, and fictional characters are no exception. I watch them engage in their lives and see where they take me. The problem with this approach is that I often have lengthy scenes that are back story and not essential to the plot, so I end up cutting those during revision.  However, for me, even trimmed scenes help create the overall flow of the characters and shape the story they’re setting out to tell.

While I personally enjoy the first few months of pantsing (before I have to tie all the threads together into an ending AND revise), there are serious negatives. I have two critique partners who are meticulous plotters. They have detailed outlines and always know exactly how their stories will unfold. And I’m usually green with envy when we hit revisions, because for them it’s checking things off a list, while for me it is digging for a plot amongst all my ramblings. Maybe one day I’ll figure out how to balance the two approaches! 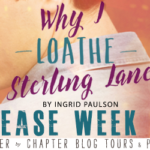