Young inventor Nicolette Lampton is living her own fairy tale happy ending. She’s free of her horrible step-family, running a successful business, and is uninterested in marrying the handsome prince, Fin. Instead, she, Fin, and their friend Caro venture to the lush land of Faerie, where they seek to put an end to the bloody war their kingdom is waging. Mechanical armies and dark magic await them as they uncover devastating secrets about the past and fight for a real, lasting happily-ever-after for two troubled countries—and for themselves. Nicolette’s awful stepsisters call her “Mechanica” to demean her, but the nickname fits: she learned to be an inventor at her mother’s knee. Her mom is gone now, though, and the Steps have turned her into a servant in her own home.

But on her sixteenth birthday, Nicolette discovers a secret workshop in the cellar and begins to dare to imagine a new life for herself. Could the mysterious books and tools hidden there—and the mechanical menagerie, led by a tiny metal horse named Jules—be the key to escaping her dreary existence? With a technological exposition and royal ball on the horizon, the timing might just be perfect for Nicolette to earn her freedom at last.

Gorgeous prose and themes of social justice and family shine in this richly imagined Cinderella retelling about an indomitable inventor who finds her prince . . . but realizes she doesn’t want a fairy tale happy ending after all. Hi! I’m Betsy Cornwell, an American writer and teacher living in a stove-heated cottage in west Ireland, together with my horse trainer spouse, a small herd of dairy goats, and an increasing number of other animals. I write fiction and nonfiction and blog about Irish folklore, travel, wild food, goats (of course!), homesteading, and growing up.

Find Katie on the web:

10 favorite books I have read and one I didn’t.

I have so many favorite books, and every time I really fall for a new read I announce that it’s “a top ten book for me, seriously!” So, with that in mind, here’s what I’m pretty sure are my top ten of all the top tens I’ve declared over the years:

I Capture the Castle by Dodie Smith has been my favorite book since I was seventeen, and I can’t really see it ever leaving that top spot. The narrator, Cassandra Mortmain, feels like a dear old friend, and the journal-style tale of family drama and romance in a crumbling old English castle is one I gleefully reread almost constantly.

The Bloody Chamber by Angela Carter is a collection of dark, ornate, sexy, strange fairy tale retellings, and it’s influenced my own writing aspirations more than anything else I’ve ever read.

The People of the Sea by David Thomson is a gorgeous, lyrical nonfiction work exploring the selkie myths of Scotland and Ireland. I came across it while researching my first book, Tides, which is a loose retelling of “The Selkie Bride.”

A Thousand Acres by Jane Smiley is a modern-day retelling of King Lear set on a midwestern farm. I just read it this year and it’s stunning in multiple ways.

Betsy and the Great World by Maud Hart Lovelace: I came to the Betsy-Tacy series only a few years ago, and I really wish I’d read them as a kid – largely because they would have reconciled me to the name Betsy, which I hated at the time. In Betsy and the Great World, aspiring writer Betsy Ray sets off on a solo trip to Europe in 1916. The whole series is a delight, but this entry has to be my favorite.

Anne of Green Gables by LM Montgomery: I did read the Anne books as a child, but I appreciate their craft and heart even more as an adult. Where would modern YA be without Anne Shirley?

And Both Were Young by Madeleine L’Engle is one of many L’Engle books that I adore, but I chose this one because it captures a particular kind of sullen teenage awkwardness that hit very close to home when I was a young reader.

Wintersmith by Terry Pratchett is another favorite entry in a series. I love and admire young witch Tiffany Aching, and Wintersmith catches her at a particularly charming and vulnerable time.

Deerskin by Robin McKinley is one of the most beautiful and profound fairy tale retellings I’ve ever encountered. It deals with dark themes, but it’s so empathetic and comforting and cathartic that I make sure to reread it at least once a year.

Frankenstein by Mary Shelley is just clearly a work of genius – and I still can’t get over the fact that its author was only sixteen when she started writing it.

As for a favorite book I haven’t read . . . I have to go with Villette by Charlotte Bronte. It’s one of those books that I’ve been avoiding because I’m convinced that I’ll love it and I want to give it proper time and space . . . does that happen to anyone else? No? Bueller?

3 winners will receive a finished copy of VENTURESS. US Only. 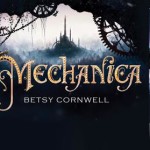