Hello Readers! Welcome to the Release Week Blitz for

Be sure to grab your copy today!

Tyler Bennett trusts no one. Just another foster kid bounced from home to home, he’s learned that lesson the hard way. Cue world’s tiniest violin. But when strange things start happening—waking up with bloody knuckles and no memory of the night before or the burner phone he can’t let out of his sight— Tyler starts to wonder if he can even trust himself.

Even stranger, the girl he’s falling for has a burner phone just like his. Finding out what’s really happening only leads to more questions…questions that could get them both killed. It’s not like someone’s kidnapping teens lost in the system and brainwashing them to be assassins or anything, right? And what happens to rogue assets who defy control?

In a race against the clock, they’ll have to uncover the truth behind Project Pandora and take it down—before they’re reactivated. Good thing the program spent millions training them to kick ass…

Aden Polydoros grew up in Long Grove, Illinois, the youngest of three children. Aden’s family moved to Arizona when he was in second grade. As a kid, he spent much of his time exploring the desert near his home. When he wasn’t searching for snakes and lizards, he was raiding the bookshelves of the local library. As a teenager, Aden decided that he wanted to be a writer. He spent his free time writing short stories. He was encouraged by his English teacher to try his hand at writing a novel, which inspired him to begin PROJECT PANDORA. The YA thriller is set for publication with Entangled Publishing in Summer of 2017. He is represented by Mallory Brown of Triada US. 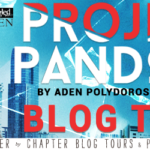