Hello Readers! Welcome to the Cover Reveal for

The Missing by Jerico Lenk!

Be on the lookout for this upcoming title from Month9Books!

HERE WE GO!
WHAT DO YOU THINK OF THE COVER?

It is 1890, and London has secrets. For sixteen-year-old Will Winchester, born Willow Winchester and raised as a young man, the safety of his own secrets rests one atop the other. Hiding his gender queerness is important. But so is hiding the ghostly voices of the Missing, which Will hears when no one else can … until the Spiritualist Black Cross Order of Occult Occurrences wants him in their service to keep peace between London’s living and dead.

The freedom to be himself may come with a price. Working alongside a patchwork team of misfits and unlikely allies, Will finds he isn’t the only one keeping secrets. Someone does not want him to uncover the truth about the ghosts who aren’t just missing from the world of the living, but missing from history itself. Can he find the Missing before he ends up becoming one of them? 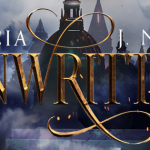