We are so excited to introduce you to a new title coming February 2018 from Feiwel & Friends/Macmillan!

I Stop Somwhere by T.E. Carter is described as THE LOVELY BONES meets ALL THE RAGE. Got your attention yet?

Here’s what readers have to say:

“Visceral with both rage and tenderness and impossible to put down.” – Amelinda – Goodreads Reviewer

“powerful and profound and makes you think” – Amanda Searcy – Author

Pre-order your copy today, and don’t miss out on this upcoming title from Macmillan!

Feed your curiosity and check out the excerpt below.
Be sure to enter the giveaway found at the end of the post!

THE LOVELY BONES meets ALL THE RAGE in a searing, heartbreaking contemporary story of a lost teenager, and the town she leaves behind.

Tormented throughout middle school, Ellie begins her freshman year with a new look: she doesn’t need to be popular; she just needs to blend in with the wallpaper.

But then the unthinkable happens and Ellie is trapped after a brutal assault. She wasn’t the first victim and now she watches it happen again and again. She tries to hold on to her happier memories in order to get past the cold days, waiting for someone to find her.

The problem is, no one searches for a girl they never noticed in the first place.

TE Carter’s stirring and visceral debut not only discusses and dismantles rape culture but also makes you slow down and think about what it is to be human.

Nobody noticed me as I cut through the room. I made my way outside, into the cold. Spring was playing games with us. Weeks earlier, it had snuck in overnight, erasing our memory of winter in a matter of hours. When we’d gone to bed, winter had lingered in the snowbanks and in the way the trees still hunched over from the weight of it. And then suddenly, spring. We woke to birds singing, birds who appeared to have been shipped overnight on a secret train, and we remembered music.

But now, winter was trying to force a comeback. Everyone outside stood looking at the pool, wondering what happened. I was shivering, wearing a skirt and thin shirt I’d borrowed from Kate when spring was still a promise.

I saw him from the periphery. From the in-between where the people inside faded into the background, but the people outside were only figures in the night. It made sense; I was a periphery girl.

I’d walked to the party, after telling my dad I was going to a friend’s. He wouldn’t have stopped me from going to Gina Lynn’s. I didn’t have other friends, so it wouldn’t have made a difference if I’d said her name. But, for some reason, I lied. I lied and I don’t know why I did.

He laughed. “Mysterious things. Of course. I’d expect nothing less from my Elusive Ellie.”

My. I heard it. The claim he laid on me. I smiled at the word.

He moved closer and I stepped back. It was automatic. Since earlier in the week, by my locker, I hadn’t stopped thinking about the possibility. But now that he was close again, I was scared. I was afraid of the way I knew I’d hurt if he waited months to talk to me again. I didn’t want to fall for a guy just because he’d smiled at me and said my name a few times. I was afraid of what would happen if there was more to it than that, but I was also afraid of how I’d feel if there wasn’t.

I’d always imagined being wanted. Of someone loving me. Choosing me. But here was this boy and if he kissed me, I knew I’d always worry about going back to not being wanted.

TE Carter was born in New England and has lived in New England for pretty much her entire life. Throughout her career, she’s done a lot of things, although her passion has always been writing. When she’s not writing, she can generally be found reading classic literature, obsessing over Game of Thrones (she’s one hundred percent Team Lannister), playing Xbox, organizing her comic collection, or binge watching baking competitions. She continues to live in New England with her husband and their two cats. 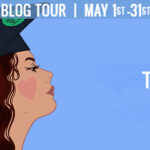