For fans of Pretty Little Liars, Little Monsters is a new psychological thriller, from the author of The Darkest Corners, about appearances versus reality and the power of manipulation amongst teenage girls.

Kacey is the new girl in Broken Falls. When she moved in with her father, she stepped into a brand-new life. A life with a stepbrother, a stepmother, and strangest of all, an adoring younger half sister.

Kacey’s new life is eerily charming compared with the wild highs and lows of the old one she lived with her volatile mother. And everyone is so nice in Broken Falls—she’s even been welcomed into a tight new circle of friends. Bailey and Jade invite her to do everything with them.

Which is why it’s so odd when they start acting distant. And when they don’t invite her to the biggest party of the year, it doesn’t exactly feel like an accident.

But Kacey will never be able to ask, because Bailey never makes it home from that party. Suddenly, Broken Falls doesn’t seem so welcoming after all—especially once everyone starts looking to the new girl for answers.

Kacey is about to learn some very important lessons: Sometimes appearances can be deceiving. Sometimes when you’re the new girl, you shouldn’t trust anyone.

I call Jade as soon as I’m closed in my room. She picks up on the first ring. “Have you heard anything?”

“No. But that cop—the woman from yesterday—she just left my house.” I glance out my window at the driveway, watching snow fall on the rectangle of pavement where Ellie Knepper had parked her cruiser.

“I talked to her today too.” Jade’s voice is ragged. “They’re supposed to make a statement on the news about it tonight. Announce she’s officially a missing person and tell people there’s gonna be a vigil. Did you hear about Cliff?”

My stomach drops to my toes. “No. What happened?” “Apparently someone heard him and Bridget get into a huge

fight at Sully’s party. Bridge confronted him after someone saw Cliff outside talking to Bailey by her car.” Jade’s voice goes warbly. “Cliff left the party alone, all pissed off.”

My head is cottony. I think of the deer blood in Cliff’s backyard. In Cliff’s mind, Bailey had cost him his scholarship, and now probably his girlfriend too. Could he really have hated Bailey enough to get rid of her, though?

“I hate myself so much,” Jade whispers.  “I was upstairs

smoking a stupid joint while all of this was going down. If I

hadn’t listened to her, made sure she got home okay—” “There’s no way you could have known.”  I think of Ellie

Knepper’s reluctance to talk about Cliff. The way she seemed to be grasping at something bigger. I pull at a loose thread of yarn in the blanket draped over my bed. “Hey—did you tell the cop what we did Friday night?”

I glance at my bedroom door. “I need you to do something,” I whisper. “If the police ask about the barn, don’t say Lauren was there with us. If Ashley knew, she’d flip out.”

“Hold up.” There’s rustling on Jade’s end, then the sound of a door closing. “Why would they ask about what we did Friday night?”

“I don’t know, if they’re trying to retrace all of Bailey’s movements—Jade, promise me. It’s one thing if I snuck out, but if I brought my sister—”

“Jeez, okay, slow down. So we just don’t say we were ever there at all. I mean, technically we were trespassing, and we could get in trouble for the roof. If they ask what we did Friday night, we just say we drove around like we always do.”

A slick of sweat comes to my hands. Lying to Ashley is one thing, but lying to the police is another. It’s a dangerous road to go down.

“Hey, I gotta go,” Jade says darkly before I can answer. “Bay is about to make her TV debut.” Kara is the author of the critically acclaimed THE DARKEST CORNERS. Her new book, LITTLE MONSTERS, is coming July 25th from Random House/Delacorte. She’s written for everything from her high school newspaper to Warner Brothers Television. You can find her on Long Island, bingeing on true crime podcasts and TV shows.

3 winners will receive a finished copy of LITTLE MONSTERS, US Only. 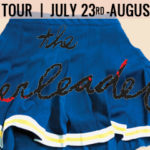