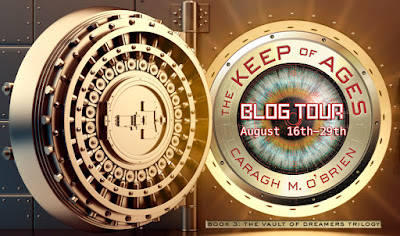 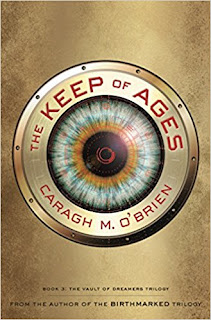 In the fast-paced, high-stakes conclusion to Caragh M. O’Brien’s Vault of Dreamers trilogy, Rosie travels to a derelict theme park to shut down dream mining once and for all.

Driven by fear when Dean Berg kidnaps her family, Rosie Sinclair strikes out across the country to rescue them. When an elusive trail leads her to Grisly Valley, the contaminated ruin of a horror theme park, Rosie has to consider that Berg may once again be manipulating her every move to make her fearful, priming her for a final, lethal dream mining procedure. As Rosie struggles to outmaneuver Berg, she unearths the ultimate vault of dreamers and the hint of a consciousness more powerful and dangerous than any she’s imagined before. Faced with unspeakable suffering and otherworldly beauty, Rosie must discover how to trust her mind, her friends, and reality itself.

Propulsive and deeply speculative, The Keep of Ages concludes the Vault of Dreamers trilogy with stirring possibilities for what it means to be alive.

About the Author: Caragh M. O’Brien is the author of the BIRTHMARKED trilogy and THE VAULT OF DREAMERS series, both from Macmillan/Roaring Brook Press. Born in St. Paul, Minnesota, Ms. O’Brien was educated at Williams College and earned her MA in the Writing Seminars from Johns Hopkins University. Her young adult science fiction has been honored by the YALSA Best Fiction for Young Adults, the Amelia Bloomer Award, the Junior Library Guild, and numerous state reading lists. A former high school English teacher, she now writes young adult novels full time from her home in rural Connecticut.

**Giveaway Ends 8.27.17 and is open to all who can legally enter.
Open to residents of the US, sorry no PO Boxes
Must be over 18 or have your parents permission to enter.
An email will be sent and you have 48 hours to reply or a new winner will be chosen.
The Winner will be announced within 48 hours at the end of the giveaway.
Giveaway is organized by Bookhounds and sponsored by the Publisher (email Bookhounds@hotmail to verify if you won!)
It has no affiliation with Facebook, Twitter, Instagram or any other entity.
Void where prohibited.
Not Responsible for lost, stolen or misdirected prizes.** 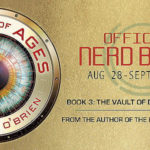