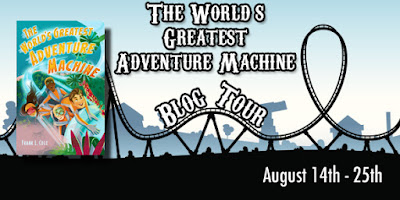 Beyond the doors, Trevor expected to see a spiral staircase or a foyer with lounging couches and a grand piano, the customary furniture one would find in an uppity mansion. Instead, the building opened up into high, vaulted ceilings made almost entirely of glass, allowing full visibility of the mountainous Globe looming outside. Three Jumbotron-like movie screens hovered in the air, displaying a barrage of information with colorful images and booming audio.

As the sliding doors sealed shut behind Trevor, blocking out the cameras and the desperate voices of the news report- ers, Doug gestured to the center of the atrium, where three children and their guardians stood waiting.

“Patricia and Trevor Isaacs, allow me to introduce you to Devin Drobbs and his father, Dan.” Doug motioned to a dark-skinned boy standing with his arms folded. He

had brown eyes and wore a red T-shirt and white basketball shorts. Devin held Trevor’s gaze for a moment, before flicking his chin in acknowledgment. The boy’s dad was an overly smiley fellow with a dark gray goatee. He brandished his phone in front of him and whispered something into his son’s ear. Devin turned and flashed a confident grin, and Trevor realized that Mr. Drobbs was using his phone as a video camera.

“I thought we agreed we wouldn’t be filming during this exchange,” Doug said, pointing at Mr. Drobbs’s device.

“Does the contract say not to?” Mr. Drobbs asked. “Actually, it may—”

“Either it does or it doesn’t, sir. And until a statement is noted in the fine print, I must insist on keeping my camera rolling.” Mr. Drobbs took a step closer, zooming his camera in so he could capture Trevor’s expression. “Little Rainy Rid- dle has one hundred thousand subscribers, eh, Devin?” He chuckled. “Well, we’ll see who has more after this weekend.” “Moving on,” Doug said, nodding to the next participant. “Nika Pushkin and her grandfather Mikel. They traveled all

the way from Russia to join in the fun.”

Though tall and skinny, Nika looked just around Trevor’s age. She had straight brown hair, olive-colored skin, and wore a white long-sleeved shirt and blue jeans. The girl carried a paper cup from which she scooped ice cream with a spoon. Trevor thought she was kind of pretty, despite the fact that she appeared to be glowering at him. Beside her, a white- haired gentleman stood stoically, wearing a red sports coat.

“Yes,” Nika answered. “We come from Chelyabinsk.” Trevor could pick up only a slight hint of a Russian accent when she spoke.

“That must have been a long flight,” he said. “We only had to fly in from Illinois.”

Nika’s grandfather sniffed and tugged on his sports coat lapels. “Fifteen-hour flight. Is not bad.” Mr. Pushkin’s accent came out thick and gruff, and he seemed incapable of smiling.

“Yeah, maybe not for you,” Nika mumbled.

“What did they serve you to eat?” Trevor asked. Fifteen hours most likely required several meals.

Nika stared at Trevor warily, before glancing at the others in the foyer. “Milk shakes,” she said, shaking her paper cup.

“My name’s Cameron,” the third participant offered. He was a boy with thick red glasses that magnified his unblinking eyes, and stark blond hair parted down the middle. “Cameron Kiffing. It sounds like kissing, which I’ve never done, only instead there are Fs, which I’ve never earned. Presently, I’m the world’s smartest eleven-year-old. My IQ is ten points above genius level. This is my mom. Her name’s Beatrice. You can call her Ms. Kiffing, if you prefer.” He nodded at the woman at his side. Ms. Kiffing was much shorter than the other adults, and she possessed a bewildered, almost lost expression, as though she had no recollection of how she had arrived at the Adventure Machine facility.

“World’s smartest eleven-year-old?” Trevor asked. “I don’t even know what my IQ is, but I’m not afraid of kissing girls or getting Fs.” Not that he had done either, but at least he could safely say he wasn’t afraid. Trevor’s mom swatted his arm.

Devin snickered and whispered something under his breath to his dad. Nika glanced up from her milk shake and looked at Trevor, the faintest hint of a smile forming on her lips.

Cameron cocked his head to the side to study Trevor as well. “Strictly by my unprofessional opinion, I would have to say you have an IQ of 110, 115 tops.”

“Is that good?” Trevor asked.

“This is it. This is our crew,” Doug said. “And we are on the eve of your grand adventure. Now, if you will turn your attention up—” Doug gestured to the ceiling above them and the lights in the atrium dimmed. The informational displays on the Jumbotrons disappeared. Lasers shot out from the center of each of the three screens, converging into one massive beam that reached all the way to the floor. The beam appeared distorted at first, but then it grew solid, forming

a door. Trevor applauded and glanced at the other winners. They all seemed equally mesmerized by the awesome display.

Suddenly, the three-dimensional image of a man appeared, emerging from the cylindrical door. If Trevor hadn’t known better, he would’ve believed the man to be actually standing there in front of them; it was that flawless. The only proof otherwise was a few granulated pixels.

“Hello, lucky winners,” the holographic man said. “My name is Terry Castleton.” He had thinning gray hair and a few wrinkles weaving out from the corners of his mouth, but there was no mistaking the striking similarities to Doug. They both had the same eyes and the same confident smile. “I’m head of research and development at the Adventure Machine facility, and I’m here today to show you our most prized creation.” More lasers, a fraction of the size of the center beam, zigzagged down from the Jumbotrons, dancing across the ground. Like magic erasers, the lasers replaced a circular section of marble floor with bubbling lava. Trevor heard someone gasp. Devin and his dad took a cautious step back from the display. It wasn’t real, of course. Just an impressive show, but Trevor thought he could feel actual heat emanating from the virtual lava.

“My brother, Terry, would’ve been here himself,” Doug whispered to the group as the lasers continued transforming

the ground into a volcanic landscape. “But unfortunately, he

had a few meetings to attend. He’ll be here tomorrow for the launch.”

The lasers finished their work, leaving only a tiny rock beneath Terry’s feet.

“You are about to embark on the adventure of a lifetime,” Terry said, then he vanished and was replaced by a long, silver vehicle. It looked like a standard roller coaster cart with an aerodynamic cone, four cushioned seats, and thick safety harnesses that pulled down over riders’ shoulders. Trevor had seen similar ones before and had even ridden in a few prior to being permanently banned from every amusement park in Illinois. Apparently, people didn’t like it when you got out of your seat during the ride. Who knew?

“We call it the Adventure Machine.” Terry’s disembodied voice spoke as the image of the roller coaster rotated, giving the group the ability to view the contraption at all angles. The cart then began moving forward along a track. “Using state- of-the-art technology, the Adventure Machine taps into the riders’ minds to create a thrilling experience.”

The background blurred as the vehicle reached incredible speeds. It plummeted down steep slopes, careened through loops, bucked, pitched, and barrel-rolled, before screeching to a stop.

“Imagine a ride that will allow you to experience this.” A series of intense scenes flashed across the screen. The cart surged through a fire-filled landscape. There was a blinding blizzard, followed by an avalanche and a tidal wave; then the images flipped through countless other scenarios, before ending with a final scene of the cart vanishing into a pitch-black tunnel.

The column of light vanished along with the Adventure Machine and Terry Castleton. The Jumbotrons once again displayed their previous images.

August 18th — A Dream Within a DreamAugust 21st— Reading Teen 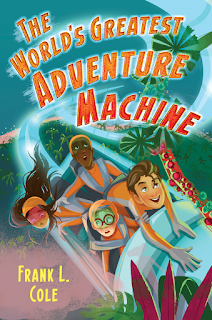 An adventure novel about four lucky kids and a mysterious, but thrilling ride for fans of Charlie and the Chocolate Factory or Jurassic Park!

CastleCorp and the famous Castleton brothers are unveiling the World’s Greatest Adventure Machine! The roller coaster is an experience like no other, and four lucky kids have won the chance to be the first to ride it.

There’s Trevor, whose latest stunt got him in trouble at school again. There’s Devin, whose father is pushing him to be the next Internet sensation. Nika’s wealthy grandfather isn’t too pleased about her participation. And Cameron, he’ll be the first to tell you, is a certified genius.

The whole world is watching. But as the kids set off on their journey, they begin to realize that there is perhaps more to their fellow contest winners than meets the eye. And the Adventure Machine? It might just have a mind of its own.

Join the contestants on their wild ride if you dare. Your adventure starts now! 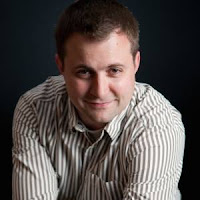 About the Author: FRANK L. COLE lives with his wife and three children out west. When not writing books, Frank enjoys going to the movies and traveling. The World’s Greatest Adventure Machine is Frank’s ninth published book and his second with Delacorte Press. His first was The Afterlife Academy. You can learn more about his writing at frankcolwrites.com or find @franklcole on Twitter.

**Giveaway Ends 8.27.17 and is open to all who can legally enter.
Open to residents of the US, sorry no PO Boxes
Must be over 18 or have your parents permission to enter.
An email will be sent and you have 48 hours to reply or a new winner will be chosen.
The Winner will be announced within 48 hours at the end of the giveaway.
Giveaway is organized by Bookhounds and sponsored by the Publisher (email Bookhounds@hotmail to verify if you won!)
It has no affiliation with Facebook, Twitter, Instagram or any other entity.
Void where prohibited.
Not Responsible for lost, stolen or misdirected prizes.**