A teenage girl calls her beloved older brother back from the grave with disastrous consequences.

Dashiell Bohnacker was hell on his family while he was alive. But it’s even worse now that he’s dead….

After her troubled older brother, Dashiell, dies of an overdose, sixteen-year-old Ruby is overcome by grief and longing. What she doesn’t know is that Dashiell’s ghost is using her nightly dreams of him as a way to possess her body and to persuade her twin brother, Everett, to submit to possession as well.

Dashiell tells Everett that he’s returned from the Land of the Dead to tie up loose ends, but he’s actually on the run from forces crueler and more powerful than anything the Bohnacker twins have ever imagined….

Praise for WHEN I CAST YOUR SHADOW

“Porter offers a poignant consideration of how far we will go for the people we love.” ―School Library Journal, starred review

“A wildly innovative, whip-smart, and utterly spellbinding testament to family, memory, and love―and the messes and miracles of each―poised to possess legions of readers.” ―Booklist, starred review

“A haunting tale of possession that explores the ghostly landscape of dreams and nightmares―but more importantly, the particular dynamics among siblings, both oppressive and redemptive.” ―Kirkus Reviews

SARAH PORTER is the author of the Lost Voices Trilogy (Lost Voices, Waking Storms, The Twice Lost) in addition to Vassa in the Night—all for the teen audience. For over ten years she has taught creative writing workshops in New York City public schools to students in grades K-10. Porter also works as a VJ, both solo and with the art collective Fort/Da; she has played venues including Roseland, Galapagos, Tonic, Joe’s Pub, The Hammerstein Ballroom, The Nokia Theater, and the Burning Man festival. She lives in Brooklyn with her husband and two cats.

1) Tolkien’s THE HOBBIT. The book that taught me how to read!

2) BREAD AND JAM FOR FRANCIS by Russell Hoban. At age three, I was obsessed.

3) LITTLE FUR FAMILY by Margaret Wise Brown. Such a feeling of twilit mystery!

5) RUSSIAN WONDER TALES by Post Wheeler. A huge influence and the inspiration, decades later, for VASSA IN THE NIGHT.

7) The Narnia books by C. S. Lewis. As an adult I see all sorts of problems with these, but I’d be lying if I didn’t include them!

8) Same goes for Peter S. Beagle’s THE LAST UNICORN. I adored it, but it gave me some messed-up ideas.

9) FAERIES by Brian Froud. Another book whose influence has stayed with me for life. Froud taught me to be very, very careful where faeries are concerned!

10) BRIDGE TO TERABITHIA by Katherine Patterson. I don’t think any book ever had a deeper impact on me than this one. – 5 Winners will receive a Copy of WHEN I CAST YOUR SHADOW by Sarah Porter. 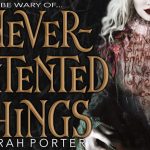