Sev is branded with the mark of a criminal—a star burned into her hand. That’s the penalty for being the daughter of the woman who betrayed their entire nation.

Now her mother’s body is displayed above Traitor’s Arch, kept in a paralyzed half sleep by the same plague that destroyed the rest of the world. And as further punishment, Sev is forced to do hard labor to prove that she’s more valuable alive than dead.

When the government blames Sev for a horrific bombing, she must escape the city or face the chopping block. Unimaginable dangers lurk outside the city walls, and Sev’s only hope of survival lies with the most unlikely person—Howl, the chairman’s son. Though he promises to lead her to safety, Howl has secrets, and Sev can’t help but wonder if he knows more about her past—and her mother’s crimes—than he lets on.

But in a hostile world, trust is a luxury. Even when Sev’s life and the lives of everyone she loves may hang in the balance. Caitlin Sangster grew up in the back woods of California and would rather go hiking, running, swimming, or general outdoorsing than just about anything else. If there aren’t any mountains, it doesn’t count as a real place. At eighteen, she moved to XinJiang, and at twenty-one it was Taiwan. She did eventually buckle down and graduate from Brigham Young University with a BA in Asian Studies and is now that person you avoid at parties because she’ll probably start talking about Shang dynasty oracle bones.

Caitlin has been writing since middle school. She always thought of it as a silly sort of compulsive habit until she realized that people like reading stories and she liked writing them and there wasn’t much silly about that.

She currently lives in Utah with her husband and four children. A desk lamp, a pen and notebook, and my kindle.

Patrick Ness! Or Patrick Rothfuss! Actually, I really like Patrick Symmes too. All the Patricks!

Having an editor point out a word or a phrase I’ve been misusing or misspelling my entire life. Deep-seeded? Nope. It’s deep-seated. Deep-seated doesn’t even make sense! But it still eats away at me. And makes me want to yell, “I’M NOT AN IDIOT, I PROMISE!!!” into the void.

A combination of both. I usually have a general idea about where things are going with plot points to hit, but it tends to be quite fluid. If something happens while I’m drafting to radically change everything, then I go with it.

Hooligan. I’ve yet to find a good place for it in a book, though. It used to be defenestrate, but now everyone likes that one.

3 winners will receive an ARC of LAST STAR BURNING, US Only. 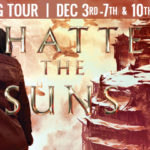