Today Julie Hall and Rockstar Book Tours are revealing the cover and an exclusive excerpt for DOMINION, book 3 in her Life After series, which releases March 20, 2018! Check out the gorgeous cover and enter to win a Signed copy of Book 1 HUNTRESS, Swag, and a $10 Amazon Gift card! 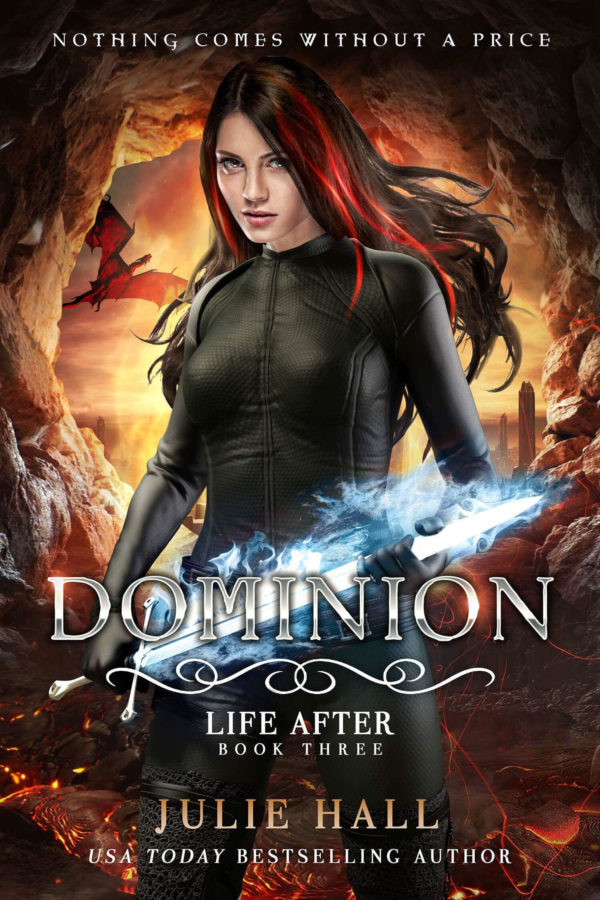 After defeating the red dragon’s legion of bloodthirsty demons, Audrey can finally settle into the afterlife with the knowledge her family is safe. But her quest for a perfect existence shatters the moment Logan is kidnapped in an attempt to bend her to Satan’s will.

Audrey must now travel to the one place no hunter has ever ventured to save the man she loves . . . Hell.

Savage demons, desiccated corpses, life sucking zombie trees, and a land of death and rot await Audrey and her friends as they battle through the fiery realm.

But Logan’s freedom comes with a price . . . the destruction of Audrey’s happily ever after.

As Satan schemes for dominion over all the realms, Audrey learns that some acts may be beyond redemption.

We sat on his bed, tucked up against the headboard, Logan sitting with one knee bent and an outstretched leg, and me curled into a ball against his chest, practically cuddled on his lap.

When my tears were spent, I let out a shaky breath of air.

“Audrey, I can’t—” Logan’s voice caught on something. His head rested on top of mine. When he continued, his voice dropped an octave, thickened with emotion. “I can’t imagine what you went through down there. I’m so very sorry. I should never have bonded with you.”

I savored the warm thud of his heartbeat on my cheek for several seconds before what he’d said sunk in. The leakage from my eyes along with a bad case of the feels must have dulled my reactions.

I jerked to a sitting position to stare at him in disbelief—and anger. My face was crusted with the salt of dried tears. There was no doubt I was a hot mess and a half. But that was nothing compared to the mess he’d just spewed.

He reached for me again, but I put a hand up to ward off his movements and curled my upper lip.

Where to even start?

“What I went through? Are you insane?” His gaze jumped around my face as if he couldn’t decide on a safe place to land. “Logan, I actually felt an echo of what you went through. I even experienced some of it in a dream or a weird out of body experience where I was you. What I went through was nothing.”

He opened his mouth to speak, but I slashed a hand through the air to stop him. “Nothing compared to what had been done to you. You were torn to shreds. Literally, in some spots.”

His face paled. I shouldn’t have gone there and instantly regretted bringing it up—but I couldn’t handle his concern for me when he had been tortured. We’d get to the “should never have bonded with you” comment next.

Shoot, I gave him another reason to beat himself up. Rookie mistake. “Never mind about that. And what’s this business about regretting bonding with me? Frankly, that’s kind of—hey!”

He grabbed my upper arms and held me still as I tried to push away even farther. His blue eyes flashed, and his face was hard as stone. “If bonding with you caused you to feel even a second of what I endured in that place, then yes, it’s something I deeply regret and would do anything to take back.”

Buried under the caveman response was something sweet, but I wasn’t feeling it.

As I sputtered to find the right words, the corners of Logan’s lips just barely tipped up. I stopped talking when I spotted his involuntary reaction. Of course I’d find a guy who thought it was cute when I got mad. Actually, that was probably pretty lucky considering I did tend to have a short fuse.

I pressed my lips together and narrowed my eyelids before performing another visual sweep of his body.

Yep, he looked to be relatively healthy.

I launched myself at him and grabbed the sides of his face, and then I planted my lips right over his. Just like the first time I’d surprised him with a kiss, he was momentarily stunned.

I gently but firmly bit down on his full bottom lip in a silent demand for him to get with the program. Then I pulled back a fraction, just far enough that my lips grazed his when I spoke.

I’d gone to Hell and back for this guy. I wanted to collect my reward . . . with interest. 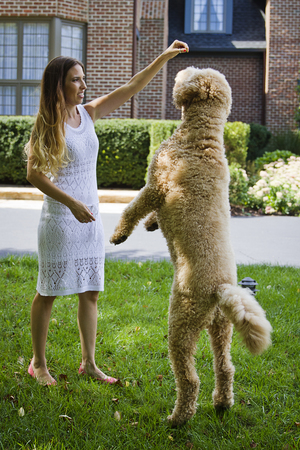 Before writing her first novel Julie worked as a film publicist and rubbed elbows with the rich and famous . . . as in she would gently nudge them to let them know their meal had arrived during press interviews.

She now spends most of her “office hours” with her two furry writing buddies, Bear and Coco. Her daughter thinks that mommy’s superpower is “sleeping all day,” but that’s because she’s often awake until the wee hours of the morning weaving tales of adventure in worlds of her own creation. When asked in an interview what she wanted to be when she grew up, she’s quoted to have answered, “to never have to grow up.”

She currently lives in Portland, Oregon with her four favorite people–her husband, daughter, and two fur babies (because dogs are people too).

Connect with Julie here, or on social media. 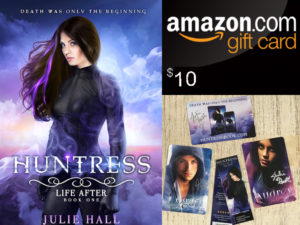 1 winner will receive a signed paperback of HUNTRESS, the first book in the series as well as LIFE AFTER series swag (signed character cards, magnets, bookmarks and stickers) and a $10 Amazon GC, US Only. 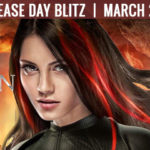