I am so excited that DOMINION by Julie Hall is available now and that I get to share the news!

If you haven’t yet heard about this wonderful book, be sure to check out all the details below.

This blitz also includes a giveaway for a complete signed paperback set (4 books), a $10 Amazon GC, and Life After Swag, US Only, courtesy of Julie and Rockstar Book Tours. So if you’d like a chance to win, enter in the Rafflecopter at the bottom of this post. 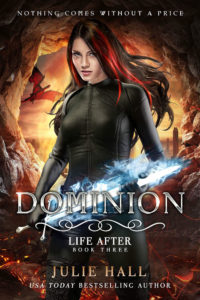 After defeating the red dragon’s legion of bloodthirsty demons, Audrey can finally settle into the afterlife with the knowledge her family is safe. But her quest for a perfect existence shatters the moment Logan is kidnapped in an attempt to bend her to Satan’s will.

Audrey must now travel to the one place no hunter has ever ventured to save the man she loves . . . Hell.

Savage demons, desiccated corpses, life sucking zombie trees, and a land of death and rot await Audrey and her friends as they battle through the fiery realm.

But Logan’s freedom comes with a price . . . the destruction of Audrey’s happily ever after.
As Satan schemes for dominion over all the realms, Audrey learns that some acts may be beyond redemption. 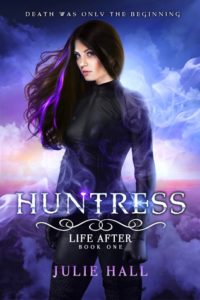 No one’s afterlife is as dispiriting as Audrey’s―at least that’s what she believes after waking up dead without her memories and being promptly assigned to hunt demons for the rest of eternity. She’s convinced God’s made a cosmic mistake; after all, she’d rather discuss the color of her nails than break them on angelic weapons.

It doesn’t help that her trainer, Logan, is as infuriating as he is attractive. And just when Audrey and Logan appear close to developing an amicable relationship, a decision made under duress pushes their hearts in a direction neither of them saw coming.

Despite her sub-par fighting abilities, an ancient weapon of unparalleled power chooses Audrey as its wielder, attracting the cautious gazes of her fellow hunters and the attention of Satan himself. With Satan’s eyes now fixed on Audrey, a battle for the safety of the living looms in the shadows. 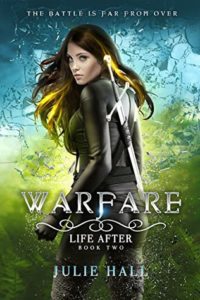 The battle is far from over.

When the lives of her loved ones are put in peril, who will Audrey turn to for help? On the surface, Audrey’s existence in the afterlife is coming together. Her quirky new mentor guides her on the path to becoming the demon hunter she always hoped. She has great friends and even a kinda-sorta-maybe new boyfriend. But if things are so wonderful, why is Logan never far from her thoughts?

After learning that her family is the target of an unprecedented demonic siege Audrey puts all she’s gained in jeopardy by defying heavenly authorities and returning to Earth. Stranded at the place she once called home with the one person she’s been desperate to forget, she’ll face vicious monsters, betrayers, and a legion of demons with an insidious weapon that even her celestial sword can’t defeat.

Will Audrey’s mistakes in the afterlife be what destroys the lives of the ones she loves the most? 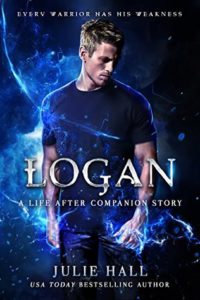 Every warrior has his weakness.
Logan has it all—friends, popularity, girls—but his perfect life isn’t all he imagined.

When one mistake leads to his untimely arrival in the afterlife, he becomes a weapon against the evil that lurks on Earth.

When a mission goes awry he emerges with a secret superpower, but is broken in mind and body. He cleverly hides his scars, until the day he’s assigned to train an unlikely new demon hunter. Even though Audrey is as fiery as she is alluring, this beauty may be the one to tame his inner beast.

Now the only thing he’s sure of is that his existence will never be the same.

Fans of The Mortal Instruments, Supernatural, and This Present Darkness, won’t want to miss experiencing the beginnings of this epic love story.

LOGAN is a companion novella to the bestselling and multiple award-winning LIFE AFTER series. It can be read as a standalone, or as Book 2.5 in the series.

We sat on his bed, tucked up against the headboard, Logan sitting with one knee bent and an outstretched leg, and me curled into a ball against his chest, practically cuddled on his lap.

When my tears were spent, I let out a shaky breath of air.

“Audrey, I can’t—” Logan’s voice caught on something. His head rested on top of mine. When he continued, his voice dropped an octave, thickened with emotion. “I can’t imagine what you went through down there. I’m so very sorry. I should never have bonded with you.”

I savored the warm thud of his heartbeat on my cheek for several seconds before what he’d said sunk in. The leakage from my eyes along with a bad case of the feels must have dulled my reactions.

I jerked to a sitting position to stare at him in disbelief—and anger. My face was crusted with the salt of dried tears. There was no doubt I was a hot mess and a half. But that was nothing compared to the mess he’d just spewed.

He reached for me again, but I put a hand up to ward off his movements and curled my upper lip.

Where to even start?

“What I went through? Are you insane?” His gaze jumped around my face as if he couldn’t decide on a safe place to land. “Logan, I actually felt an echo of what you went through. I even experienced some of it in a dream or a weird out of body experience where I was you. What I went through was nothing.”

He opened his mouth to speak, but I slashed a hand through the air to stop him. “Nothing compared to what had been done to you. You were torn to shreds. Literally, in some spots.”

His face paled. I shouldn’t have gone there and instantly regretted bringing it up—but I couldn’t handle his concern for me when he had been tortured. We’d get to the “should never have bonded with you” comment next.

Shoot, I gave him another reason to beat himself up. Rookie mistake. “Never mind about that. And what’s this business about regretting bonding with me? Frankly, that’s kind of—hey!”

He grabbed my upper arms and held me still as I tried to push away even farther. His blue eyes flashed, and his face was hard as stone. “If bonding with you caused you to feel even a second of what I endured in that place, then yes, it’s something I deeply regret and would do anything to take back.”

Buried under the caveman response was something sweet, but I wasn’t feeling it.

As I sputtered to find the right words, the corners of Logan’s lips just barely tipped up. I stopped talking when I spotted his involuntary reaction. Of course I’d find a guy who thought it was cute when I got mad. Actually, that was probably pretty lucky considering I did tend to have a short fuse.

I pressed my lips together and narrowed my eyelids before performing another visual sweep of his body.

Yep, he looked to be relatively healthy.

I launched myself at him and grabbed the sides of his face, and then I planted my lips right over his. Just like the first time I’d surprised him with a kiss, he was momentarily stunned.

I gently but firmly bit down on his full bottom lip in a silent demand for him to get with the program. Then I pulled back a fraction, just far enough that my lips grazed his when I spoke.

I’d gone to Hell and back for this guy. I wanted to collect my reward . . . with interest. 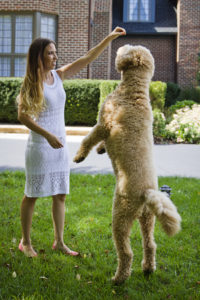 About Julie:
Julie Hall is an award-winning, USA Today bestselling author of young adult fantasy fiction.
Before writing her first novel Julie worked as a film publicist and rubbed elbows with the rich and famous . . . as in she would gently nudge them to let them know their meal had arrived during press interviews.
She now spends most of her “office hours” with her two furry writing buddies, Bear and Coco. Her daughter thinks that mommy’s superpower is “sleeping all day,” but that’s because she’s often awake until the wee hours of the morning weaving tales of adventure in worlds of her own creation. When asked in an interview what she wanted to be when she grew up, she’s quoted to have answered, “to never have to grow up.”
She currently lives in Portland, Oregon with her four favorite people–her husband, daughter, and two fur babies (because dogs are people too).
Connect with Julie here, or on social media.

1 winner will receive a complete signed paperback set (4 books), a $10 Amazon GC, and Life After Swag, US Only. 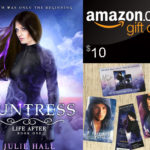