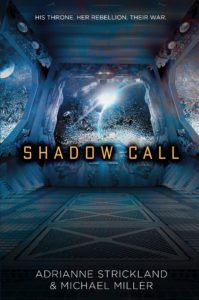 His throne. Her rebellion. Their war.

Qole is the youngest starship captain in living memory on her homeworld of Alaxak and has spent her life hunting a dangerous energy source called Shadow. Alaxans distrust and evade the galaxy’s royalty as a rule, but Qole is now harboring the exiled Prince Nevarian Dracorte, along with some very conflicting feelings about it—and him.

Nev’s feelings are just as complicated, but not towards her. When it comes to Qole, he knows one thing: he’d do anything to stay with her. But when Alaxak is attacked and Nev finds himself framed for murder, he realizes the only way to help Qole and her people is to fight for the throne that should be his. To become the royal she might hate.

As for Qole, she would never have imagined herself as the leader of a rebellion. Despite that, she soon realizes that hiding from her power is no longer an option. It’s time to answer the call, even if it kills her. 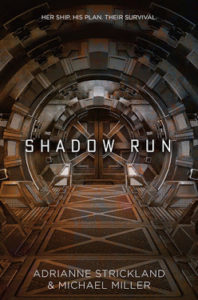 “Firefly” meets DUNE in this action-packed sci-fi adventure about a close-knit, found family of a crew navigating a galaxy of political intrigue and resource-driven power games.

Nev has just joined the crew of the starship Kaitan Heritage as the cargo loader. His captain, Qole, is the youngest-ever person to command her own ship, but she brooks no argument from her crew of orphans, fugitives, and con men. Nev can’t resist her, even if her ship is an antique.

As for Nev, he’s a prince, in hiding on the ship. He believes Qole holds the key to changing galactic civilization, and when her cooperation proves difficult to obtain, Nev resolves to get her to his home planet by any means necessary.

But before they know it, a rival royal family is after Qole too, and they’re more interested in stealing her abilities than in keeping her alive.

Nev’s mission to manipulate Qole becomes one to save her, and to survive, she’ll have to trust her would-be kidnapper. He may be royalty, but Qole is discovering a deep reservoir of power—and stars have mercy on whoever tries to hurt her ship or her crew.

“The world-building is excellent, with a convincingly unique source of cosmic energy that has the potential for extraordinary power. The writing is accomplished; the plot, though familiar, has good twists; and the pace is appropriately fast.”—School &amp; Library Journal

I was home. Not only was I in my captain’s quarters on the Kaitan, but the ship was docked on Alaxak, in my village har­bor, Gamut. I stretched on the furs of my bunk, still drowsy from my afternoon nap after a furious Shadow-fishing sched­ule had kept us up all night. I wasn’t ready to be awake, but a knock at the door sent me sitting up.

I knew who it would be before I heard his voice. “It’s me.”

“Hi,” I said as Nev entered without waiting.

Ancestors, but the sight of him still took my breath away, even with how easily he slipped in that door these days, even with the scraggly beard he now wore as a partial disguise against casual observers. The startling silver-gray eyes, so bright they nearly glowed, the sculpted face, the perfect waves of light brown hair my fingers itched to touch. The fact that all these features came from very particular bloodlines didn’t seem to bother me anymore. Not much, anyway.

I stood up as he entered, and before I knew what was hap­pening, his arms were around me, and he was crushing me to his chest.

Whoa. I still wasn’t used to this. And, Great Collapse, he was strong.

“I missed you,” he breathed into my hair.

I let out a strangled laugh. “You saw me all day—er, night. And you’re also squeezing the air from my lungs.”

“Sorry.” He loosened his hold but didn’t let me go, perch­ing his chin on the top of my head. “And I was around you. It’s not the same.”

“Well, we can’t exactly be doing this in the middle of a Shadow run. We might as well fly straight into a star.”

Nev’s arms slipped away from me. Maybe he’d sensed my stiffness. I didn’t mind his presence here—in fact, part of me wanted it to be a more permanent arrangement. But the ten­sion from the previous run was still too fresh in my mind.

Instead of talking about any of that, he said, “Come out with me.”

“There’s a bonfire on the beach tonight.” He playfully tugged my arm toward the door. “You know, you led me to believe this place was dreadfully boring—and I thought it was too, when I was here by myself. But I now know that I was just never invited to where the real fun was.”

Not many people wanted me around. Everyone knew what happened to people in my family. It happened to other families too, even on other planets near concentrations of Shadow, but my family was one of the oldest on Alaxak, our Shadow grounds the biggest. Now only Arjan and I were left of the Uvgamuts. We were like missiles ready to explode.

Not so fun at parties.

That didn’t stop Nev. “All the more reason for you to come,” he said.

Somehow, I let him drag me out the door and off the ship. “Wait, the rest of your disguise,” I said as we headed down the ramp that stretched to the dock.

His new beard wasn’t enough to mask him, though it helped. He paused to slip in the flat brown contacts and bite down on a capsule, both of which he always carried with him now. His features altered in seconds, almost like they were shifting slightly on his face, and then we were good to go.

The walk down to the beach was freezing, crystalline, stun­ning. I’d seen it many times, but alongside Nev, an outsider, I viewed it with new eyes. The night sky was black velvet glit­tering with gems, with a sash of shimmering, colorful light across the expanse—the far-off molecular clouds. The two moons shone like spotlights. Our breath fogged the air as we stared up at it all, walking hand in hand and trying not to trip over rocks, chunks of ice, or driftwood on the path from the dock down to the beach. Gamut itself was a collection of softly glowing orbs beyond the shore, as were the lights of various starships along the dock.

The ocean was a humming whoosh in our ears, and for a second, I didn’t know if I’d ever been anywhere more perfectly beautiful. In that moment, I forgot everything that was bother­ing me.

Until Nev finally brought it up.

“I know today—last night—was difficult. I know the crew hasn’t entirely accepted me, especially Arjan, and since he’s your brother, you might find that particularly troubling.” He spoke quickly, as if to get it all out before I could stop him—deny it, even though there was nothing to deny. He and Arjan had been at each other’s throats the entire run. “But we can do this,” Nev finished.

This. That little word held so much. And I got the feeling that Nev had intended it to. What was this? Nev, living and working on my ship, my planet? The two of us together, not just as captain and crew, but as something more? Building a future we could both share, despite coming from completely different places?

I wasn’t even quite sure what that future would look like. I didn’t know if I could share the responsibilities of captaining the Kaitan with Nev, or if he could give up all remnants of his old life to accept them. Even if we could, would we make our union more official? I’d never let myself consider something like marriage before. I never thought I’d live long enough.

I still didn’t know if I would, but for some reason, the threat of death was no longer enough to keep me from toying with the possibilities.

“I didn’t bring you out here to talk about that, though,” he said, helping me over a particularly large driftwood log, pale as bone in the night. No one usually helped me step over things; he only got away with it because he was holding my hand. Still, I somehow liked it. Which meant my brain was definitely turning into a puddle of sickly sweet goop.

“So what do you want to talk about?”

“Anything. We haven’t had much time for simple con­versation with so much outside interference.” As if our cop­ing with his exile and fishing for Shadow were only outside interference—but in the darkness, I caught Nev’s grin, which let me know he was joking. “Why, Miss Uvgamut, courtship usually involves getting to know one another, flirtatious banter, flattery, starlit walks . . .”

I tried to suppress my own grin. “Is that what this is—courtship?” Nev looked at me so seriously for a moment that my cheeks grew warmer than should have been possible out here. I went on quickly. “Well, whoever wrote your courtship manuals probably didn’t plan for it to be below freezing. Or for giant logs and pebble beaches in place of crystal floors and hand-tailored gowns,” I teased, as he struggled up onto another log that was waist-high. The bonfire winked at us in the dis­tance from beyond it.

“Oh, I don’t think any Dracorvan courtship manual would have covered someone like you. You’re one of a kind, I’m afraid.” He stuck his hand down for me, but I ignored it and vaulted up onto the log instead.

“Is this the flattery part of the flirtatious banter?”

Nev laughed loudly, his unrestrained amusement ringing all around us, and I realized I loved that sound.

His hands slid along my arms, top to bottom. It didn’t mat­ter that I was buried in layers of fur-lined leather; his touch made me shiver. “I can’t believe I ever thought flattery would work on you,” he said. “Remember when we first met? You told me if I sucked up any harder, you’d think you were in a vacuum.”

Now I couldn’t keep from grinning. “Who knows, maybe it did work.”

“Should I try again, then?” He cleared his throat theatri­cally and swept his hand to his heart. “You fly a ship better than a Bladeguard wields a Disruption Blade, and you lead your crew like a seasoned general—”

My own laugh rang out now. “Ancestors, no. Stop!”

“So then let’s get to know each other instead.”

Want more? Go to Seeing Double in Neverland on 4/20 for the next part! 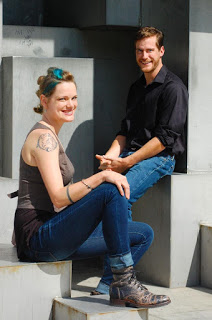 ADRIANNE STRICKLAND and MICHAEL MILLER met in their hometown of Palmer, Alaska, where they agreed on 99% of book taste and thus decided to write together. Adri spends her summers as a commercial fisherwoman in Bristol Bay, Alaska, and the rest of the year writing. Michael grew up off the grid in a homestead in Alaska and now works in IT and tech. This is their second book together.

3 winners will receive a finished copy of SHADOW CALL, US Only.

Ends on May 4th at Midnight EST!