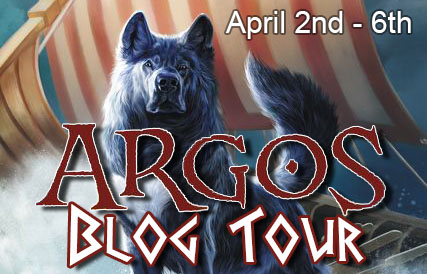 Welcome to Day #1 of The Argos Blog Tour!
To celebrate the paperback release of Argos: The Story of Odysseys as Told by His Loyal Dog on March 27th, blogs across the web are featuring exclusive content from Ralph Hardy and 5 chances to win a copy of the book!
The Inspiration for Argos: The Story of Odysseus as Told by His Loyal Dog
After I had self-published a novel about a girl who lived on a big cat rescue center, I began thinking abut writing a boy and his dog story as a contrast, but I didn’t know where to start. Then two events occurred somewhat simultaneously. In North Carolina many ninth grade public school students read the Odyssey as part of their language arts curriculum, and my son had left his copy lying on the sofa one night. Looking at the cover I thought back to how much I enjoyed the Odyssey when I read it many years ago. A few days later while surfing the net (which writers do to avoid writing) I came across a reference to Argos–the article was about examples of loyalty, I believe– and a little bell in my head rang. I ran upstairs and found my copy of the Odyssey and went straight to the index. Argos appears in 14 lines. Out of 12,000. There was my dog. And Odysseus’s son Telemachos was the boy. I ran back downstairs, opened my Mac, and wrote “Chapter One: On the Stupidity of Sheep.” In nine months I had a nearly four hundred-page novel. I titled it The Argosiad, but my editor had a different idea for the title as it turned out.
Along the way I did quite a bit of research. My first decision was to remain faithful to the original text–or at least the two translations I had (I took one semester of Greek in college–it didn’t go well), so I read and reread both versions until I had a full grasp of the story. Then I found a website that conveniently traced Odysseus’s travels chronologically, which was quite helpful because the Odyssey moves back and forth in time, and I wanted to tell my version in a more linear fashion. Although I have been to Greece twice, I’ve never been to Ithaka, so I checked out a lot of books on Greece, and the Mediterranean in general. I needed to research the flora and fauna of the region, as well as geological features on Ithaka. Google Maps was a useful tool here, and I learned the names of the tallest mountains, the rivers, and the shape of the harbor where Odysseus set sail for Troy. Even though I didn’t use all of what I learned, I soon felt confident as I wrote my descriptive scenes of life on Ithaka.
The internet is a wonderful thing. I researched Greek warships, the weapons carried by Greek warriors, Greek units of measure, ancient farming techniques, and more, all from my kitchen chair where I write.  I also spent time observing my own dog–he sleeps a lot–and videos of shepherd dogs as they herd their sheep. A number of readers have commented on how accurate the story feels to them, and that has been very gratifying.
Once the book was accepted for publication I prepared myself mentally for the editing process, which writer friends had warned can be very painful. But I was lucky. I had to merge my introduction and the first chapter and change some scenes from “PG-13 to PG.” Fair enough. My final edit was the most onerous: after several months passed my editor told me to change the novel from past to present tense. I pushed back on this, but lost that battle. I had to change the plot a little to accommodate the tense change and introduce a new character, but I was pleased with the result.
But perhaps the most satisfying aspect of the book is that I’ve recently learned that Argos is being used in a pilot program in New Hampshire where the Odyssey is taught to veterans returning from Iraq and Afghanistan suffering from PTSD. Argos will be used in family therapy sessions, so the children of these veterans can also understand the difficulties and challenges of returning from war. Telemachos would have been proud. 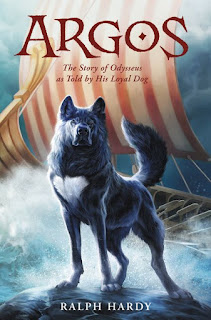 Fans of Rick Riordan’s Percy Jackson series will love this reimagining of Homer’s The Odyssey told from the point of view of Odysseus’s loyal dog, Argos.

Now available in paperback, this rousing story of devotion and determination is an original take on one of the most beloved myths of all time.

For twenty years, the great hero Odysseus struggles to return to home on Ithaka. He defeats monsters. He outsmarts the Cyclops. He battles the gods. He does whatever it takes to reunite with his family.

And what of that family—his devoted wife, Penelope; his young son, Telemachos; his dog, Argos? For those twenty years, they wait, unsure whether they will ever see Odysseus again. But Argos has found a way to track his master.

Any animal who sets foot or wing on Ithaka brings him news of Odysseus’s epic voyage. These tales bring hope that one day his master will return. Meanwhile, Argos the loyal dog watches over his master’s family and protects them from the dangers that surround a throne without its king. 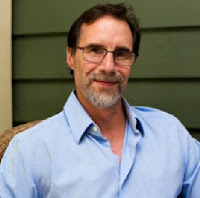 About the Author: Ralph Hardy graduated from the University of North Carolina and received an MFA from Columbia College, Chicago. He now lives in Chapel Hill, North Carolina with his wife and two children. He is also the author of Lefty and The Cheetah Diaries.

Giveaway Ends 4.9.18 and open to all who can legally enter.
Open to anyone with a US mailing address, sorry no PO Boxes
Must be over 18 or have your parents permission to enter.
An email will be sent and you have 24 hours to reply or a new winner will be chosen.
The Winner will be announced within 24 hours at the end of the giveaway.
Giveaway is organized by Bookhounds and sponsored by the Publisher
Please add BookHounds@Hotmail to your address book. You can also email to verify if you have won.
It has no affiliation with Facebook, Twitter or any other entity.
Not responsible for lost or misdirected prizes. 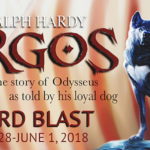 #Giveaway ARGOS: THE STORY OF ODYSSEUS AS TOLD BY HIS LOYAL DOG by Ralph Hardy @RalphHardy1 #BookBlast Ends 6.22