THE PROS OF CONS 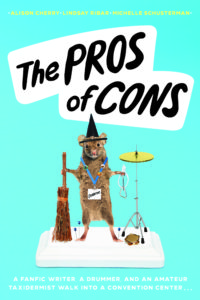 Drummer Phoebe Byrd prides herself on being one of the guys, and she’s ready to prove it by kicking all their butts in the snare solo competition at the Indoor Percussion Association Convention.

Writer Vanessa Montoya-O’Callaghan has been looking forward to the WTFcon for months. Not just because of the panels and fanfiction readings but because WTFcon is where she’ll finally meet Soleil, her internet girlfriend, for the first time.

Taxidermy assistant Callie Buchannan might be good at scooping brains out of deer skulls, but that doesn’t mean it’s her passion. Since her parents’ divorce, her taxidermist father only cares about his work, and assisting him at the World Taxidermy and Fish-Carving Championships is the only way Callie knows to connect with him.

When a crazy mix-up in the hotel lobby brings the three girls together, they form an unlikely friendship against a chaotic background of cosplay, competition, and carcasses! 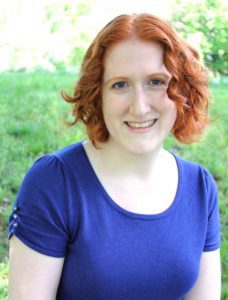 I grew up in Evanston, IL, then went to Harvard and got a degree in photography. (Yes, that is possible. Although they like to call the visual arts “Visual and Environmental Studies,” for some unknown reason.) Then I spent the next three years as a freelance lighting designer for various theaters throughout the Northeast. Eventually, I got tired of hanging out on ladders and wrestling with faulty electrical equipment for 80 hours a week while getting paid almost nothing, so I spent the next four years working as a photographer for the Metropolitan Opera. Now I live in Brooklyn with my two kitties, Vivian and Sophia, and write full-time. I’m represented by Holly Root at Root Literary. 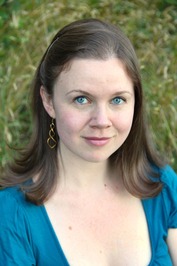 Lindsay Ribar lives in New York City, where she works in book publishing by day and writes YA novels by night. She attends far too many concerts, watches far too much nerdy TV, and consumes fanfiction like it’s made out of chocolate. She is fond of wine, cheese, and countries where they speak English but with really cool accents. Oh, and she has a Harry Potter tattoo.

Michelle Schusterman is the alleged author of less than one hundred books for kids and teens, most of which are not published under a secret pseudonym, and all of which include various characters. She lives on a steamboat with her pet crawfish, unless she’s lying, in which case she lives among the spiders beneath the stage at the Metropolitan Opera, unless that’s another lie, in which case she lives in an apartment in Queens with her chocolate lab, who can talk.

The story is set at the convention center in Orlando with multiple happenings at the same time. Phoebe is there to drum, Vanessa is there to meet her online girlfriend and writing partner, Soliel, while Callie is at the taxidermy convention.  When it seems everything has gone wrong for all of the girls, they have a “cute-meet” ending in forever friendship. Each chapter alternates between the characters and comes together seamlessly at the end. Each character experiences a crisis and gets through it when they all become friends.  It is blended so that each character is unique but the three authors come together to make it work.

I always worry when three authors come together in one book but it can and does work in this one. The writing all works together and the characters all have a unique voice and style which I think is helped by three authors.  I really enjoyed reading this one and with the need these days for diversity, it covers all of the bases without being condescending. I would love to read more about these characters.

3 winners will receive a finished copy of THE PROS OF CONS, US Only.